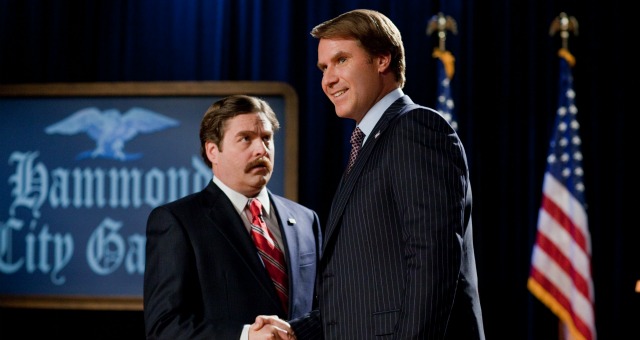 Will Ferrell is a funny guy, in a good way. I loved his “Stranger than Fiction.” And “The Other Ones” is worth a second viewing. It’s hilarious. Now he’s in Jay Roach’s “The Campaign,” opening next week, with Zach Galifinakis. Jay Roach, who directed “Game Change” for HBO and “Dinner for Schmucks” and “Austin Powers” combines his political and comedy backgrounds to make this satire. When I asked Will this week at the Svedka-sponsored tastemakers screening thrown by Peggy Siegal, what he was doing next, he replied drolly: “We’re making Anchorman 2 and 3 back to back in New Zealand.” Ouch! Peter Jackson got a little “zetz” there.

Meanwhile, one star was missing from the “Campaign” premiere: Jason Sudeikis, who’s off shooting a film. I told you last fall–almost a year ago — that Sudeikis would be leaving “Saturday Night Live” along with Kristen Wiig and Andy Samberg. He’s got films now–two more actually ready to make after finishing “We’re the Millers.” I’m told Sudeikis will make appearances on “SNL” through the election, and then formally split. They need him to play Mitt Romney.

But a lot of other “SNL” people were at the party, and “Mad Men” star Jon Hamm, flying solo, looking scruffy and un-Don Draper like, hung out with them. Hamm will be up at Vassar College this weekend where his long time partner, Jennifer Westfeldt, is starring in a play. He’s also shooting–as I announced here exclusively–Larry David’s improvisational movie, a sort of big screen “Curb Your Enthusiasm.” I did not ask him if Don Draper picked up those girls in the bar in the last scene of “Mad Men.”

Also at the party: “Moneyball” director Bennett Miller, who’s about to start “Foxcatcher” — “in eleven weeks,” he said. Steve Carell stars, and Miller showed us some pictures of his makeup tries on his iPhone. Pretty impressive. Jay Roach and his “Game Change” writer Danny Strong came to say hello, and the table was rounded out by writer Lynn Hirschberg and Peggy Siegal.

PS Did you know that Jay Roach is very, very lucky? He’s been married for a long time to Susanna Hoffs of the Bangles. She’s hot, let’s face it. And she has new, terrific album out. She’s also on tour this summer with the Bangles. Check out her website, www.susannahoffs.com