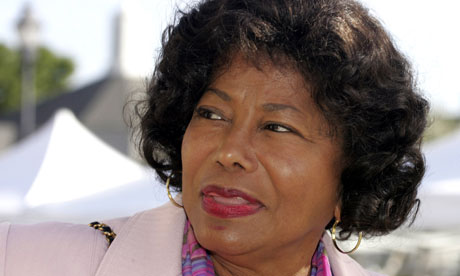 Perry Sanders, Katherine Jackson’s lawyer, met with her today. “I am pleased to report that she is fine, and she laughed at the widely publicized report that she had suffered a stroke.” Sanders said their meeting was “long and productive.” Well, that’s good news. But the news of her “stroke” came from a letter signed by five of her children–Randy, Jermaine, Janet, Rebbie and Tito. The latter later recanted. But the others have stuck to that story. The so called “mini-stroke” that was in the letter from those adult children to Michael Jackson’s executors was widely distributed right after Mrs. Jackson was hurried away to Miraval Spa in Tucson.  When her grandchildren saw the letter, they freaked out because they knew no stroke had occurred. And that’s how the chain of events was initiated, with a frightened 14 year old girl demanding to see her grandmother–and calling her uncle Randy a “liar.” Now Mrs. Jackson has lost her guardianship, and Janet Jackson has done ridiculous things in public to harm her image of being “normal.”