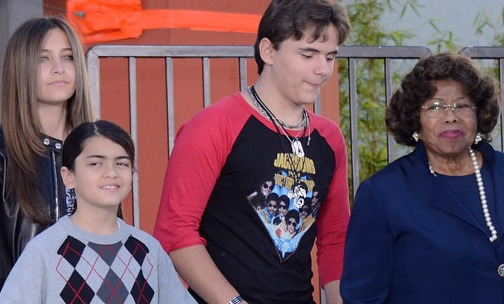 It seems like Katherine Jackson finally was returned to her home in Calabasas, California, a Los Angeles suburb, sometime in the middle of the night. Granddaughter Paris, 14, Tweeted at approximately at 3:30am Pacific Time: “grandma’s here !  #thankyougod <33″ She added in subsequent Tweets: “time to #hibernate” and ” 5 hours of sleep last night , been awake for 23 haha goodnight everybody<33.” Earlier, she’d written: they promised my grandmother would be home YESTERDAY . why isn’t she home ?”

Good question. For some reason, after insisting that Katherine fly to Tucson, Jermaine, Janet and Randy sent their mother home by car. They could have put her on a commercial flight or chartered a plane right back to Burbank Airport. Instead, they sent their 82 year old mother on an arduous road trip of seven hours or more.

She could have flown home with the “Nightline” crew.

Also last night, after seeing “Nightline,” Marlon Jackson Tweeted: “Hello everyone Thank you for your support. I’m tired of not knowing where my mom is. I did speak with her last night but she didn’t sound like herself. I was told by Janet, Randy and Jermaine that I could not see my mom. Doctor’s order. But I see them on television with her. How come they could not call me so I could be with her as well.”

Katherine had been at Miraval Spa in Tucson for more than a week, cut off from her family and the world. Someone–either Jermaine, Randy, Janet, Rebbie or all of them–or assistant Janice Smith–took her cell phone and laptop from her. Evidently the phone in her room was removed, too, as Miraval says it has phones in every room.

Her apparent abandonment of her custodial grandchildren and her absence caused Mrs. Jackson to lose temporary guardianship of Paris, Prince, and Blanket. Judge Mitchell Beckloff noted that Mrs. Jackson lost it as her absence was the cause of “third parties.” Beckloff is not stupid, knows what’s going on, and may not be so quick to restore Mrs. Jackson.

Marlon, Tito, and Jackie Jackson may also now take more of an interest in their mother’s well being. Marlon and Tito have never asked for Michael Jackson’s money. And Jackie works for Michael’s estate. Tito, father of TJ, who’s now the temporary guardian of the children, works as a jazz musician full time.