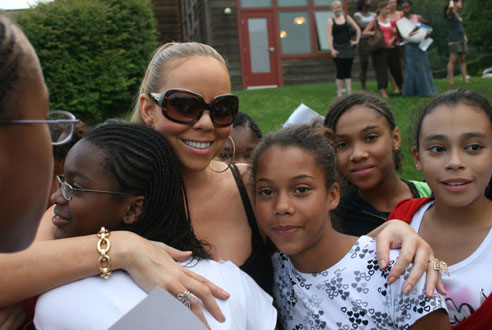 Exclusive: Lee Daniels’s “The Butler” started shooting yesterday in New Orleans. And there’s a lot of news I can tell you EXCLUSIVELY about this film starring Forest Whitaker and Oprah Winfrey. First of all, Quincy Jones has signed to compose the soundtrack. That’s a big big deal. And now I’ve heard that Daniels will film a scene for the opening of the film with Mariah Carey and Vanessa Redgrave far removed from the White House setting of the rest of the film. It sounds pretty cool, but I’ve been asked not to give it away.

Mariah is already said to be complaining about her makeup, which — as in “Precious”–she will be de-glamourized. And there’s more: because Liam Neeson is shooting Paul Haggis’s new film in Italy, he had to drop out of the role of Lyndon Johnson. So Liev Schreiber steps in. (The role of Lady Byrd is said to be minor.) And Olivia Washington, daughter of Denzel and Pauletta Washington, will make her screen debut as a civil rights activist. So far the only actress I’d like hear is in “The Butler” but isn’t is LaTanya Richardson. Lee–find her a role!

“The Butler” will be Daniels’ first PG-13 movie after more adult fare with “Monster’s Ball,” “Precious,” and “The Paperboy,” his wild new movie that opens this fall with an Oscar tipped performance by Nicole Kidman.