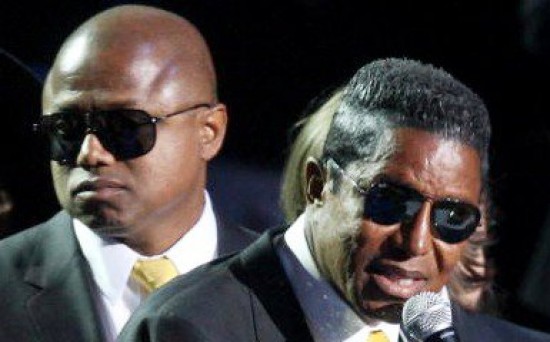 One reason for all the hostility between Michael Jackson’s brothers and the estate: the brothers had to come to the executors hat in hand for money to pay their mutual ex and mother of their children. You know, Randy and Jermaine share an ex–Alejandra. Each of them has two children with her. Randy lived with her, then Jermaine married her. When Jermaine was stuck in Burkina Faso, Africa last winter, and couldn’t get back into the U.S. unless he paid back child support, Katherine Jackson intervened. She went to the executors and asked for the $91,000 Jermaine owed in child support. The estate loaned her $80,000, which Katherine then handed over to Jermaine.

UPDATE: The estate absolutely turned down requests from Jermaine and Randy, I am told.

Interestingly, the estate has had no problems with Michael’s other siblings. Jackie Jackson has actually done work for them. Marlon and Tito each work, and long ago got off the Jackson gravy train. Rebbie Jackson’s husband, Nathaniel, has had a series of jobs including, I am told, mail carrier, which is a decent civil service job and coveted in this economy. Rebbie’s son-in-law, Rex Salas, is a music producer.

Not everyone in the Jackson family is being supported by Michael Jackson or Janet Jackson. One June 9, 2005 I interviewed Jermaine’s first wife, Margaret Maldonado. Here’s what I wrote:

Meet Margaret Maldonado, the ex-common-law wife of Jermaine Jackson and mother of two of his sons, Jeremy (18) and Jourdynn (16). Note: this was seven years ago. Margaret’s business is still going strong at www.margaretmaldonado.com

Margaret, who’s 40, has an incredibly successful business representing photographers and stylists in Hollywood. Her Web site — www.margaretmaldonado.com — speaks for itself.

At last, someone in the family has gotten up off the couch and done something with her life. Margaret’s followed the playbook invented by Jackie Onassis for her kids, Caroline Kennedy and John F. Kennedy Jr., and raised them away from the glare of their famous family.

I spoke to Margaret recently about her son Jeremy’s interview last December with Santa Barbara County sheriff’s deputies. The investigators were following up on rumors that something inappropriate had happened between Michael and Jeremy.

Margaret says nothing could be further from the truth.

“We were shocked,” she told me. “They waited until he turned 18 and was home alone. They knocked on the door one afternoon. We couldn’t believe it.”

Maldonado says she raised her two kids completely separated from the Jacksons. She was never married to Jermaine, but they were together for seven years. She says she’s never received a penny of child support, even though she has a court order for it.

“I just said, ‘Forget it.’ It wasn’t worth going to court and fighting with him. I knew I could make it on my own.”

She does not use the Jackson name, and until I called, had never made her association with the family public.

“All I ever got from them was groceries from Costco,” she said. “It was a long time ago.”

Maldonado laughs at rumors that her Range Rover and a recent family trip to Hawaii were gifts from Michael.

“I really resent that,” she said. “It [ticks] me off that people don’t think a woman can do this on her own. We take two family trips a year. My son goes to private school. That’s my Range Rover.”

Maldonado does concede that Jeremy has finished high school via home schooling. That was a result, she said, of the bad publicity following the Nov. 2002 incident when Michael dangled his baby, Blanket, over the balcony of a German hotel.

As for Michael, Maldonado says she’s close enough to her two sons to know that nothing happened between them and Michael that she needs to worry about.

“He was always just the eccentric uncle,” she said. “The kids used to follow him around like ducks. But there’s nothing else.”