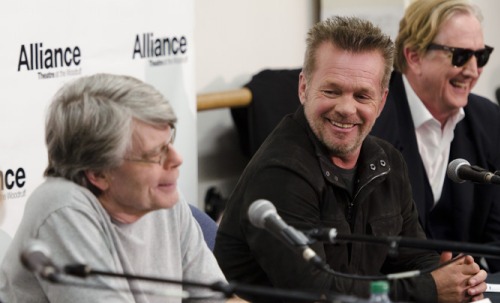 Did you know that Stephen King and John Mellencamp teamed up for a musical recently? It’s called “Ghost Brothers of Darkland County,” and it opened last spring in Atlanta to very poor reviews.

Variety wrote:  “The pairing of roots rocker John Mellencamp and horror scribe Stephen King for a Southern Gothic musical may sound irresistible. But it takes more than a groove and gore to make this tedious tale of brotherly bile work on stage. Sketchy character development, awkward staging and unclear storytelling make prospects for future life iffy beyond this world preem at Atlanta’s Alliance Theater… the principal weakness is King’s unfocused storytelling. The pairs of brothers are ill-defined beyond a few broad strokes and the dialogue is clunky and crude. (“It’s the heaven that’s got lost and that’s the hell of it.”)”

Well, that’s not stopping this crowd from trying to bring the show to New York.

Director Susan V. Booth– who was cited as the cause of much of the trouble–has scheduled presentations in New York in late September for ten days. T. Bone Burnett is the musical director. A casting notice has gone out for a Zydeco cowboy. But if the show hasn’t changed since its Atlanta run. it’s doubtful money people will clamor to invest in it. But you never know. Last year we saw the terrible “Rebecca” in a backers workshop and it’s coming to Broadway no matter what anyone says.