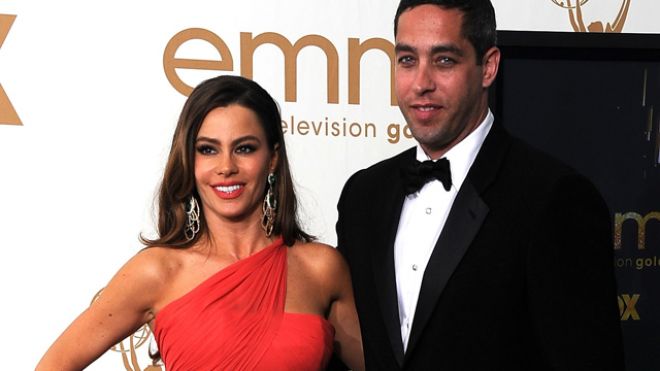 Congratulations to Sofia Vergara. The star of “Modern Family” has landed her self another family, and this one is rich, rich, rich. She’s marrying Nick Loeb, son of former Ambassador John Loeb, who himself is now head of the 200 year old German Jewish banking clan that bears his last name. The Loebs are from the original “400”–the wealthiest families in America. This is old, old, money. Ambassador Loeb’s mother was from another famous banking family, the Lehmans. If you need a comparison: the Kennedys are newcomers compared to this family.

Years ago, they merged their Loeb business with Shearson, after another merger with Rhoades and Co. They became Shearson Loeb Rhoades. Ambassador Loeb, who’s a very nice guy, has owned a very successful winery in Sonoma, California since 1973. His first cousin is Thomas Kempner, who was married for years to the late “social X ray,” thin as a rail socialite Nan Kempner. (Kempner also had a famous affair with socialite Iris Sawyer that left her broke and destitute, a story I wrote in New York magazine. That’s another story. He married his secretary ten days after Nan died.)

Nick Loeb, the fiance of Sofia, has tried a couple of unsuccessful political runs in South Florida. It’s a little unclear what he does now. He doesn’t really have to do anything. He and his sister are the Ambassador’s only children. He is loaded. He was also married once before, to a Swedish woman. They were profiled in the Palm Beach Post. http://www.postonpolitics.com/2009/10/stung-by-divorce-nick-loeb-to-drop-state-senate-bid-and-pledge-full-refund-to-contributors.

Young Loeb was criticized in some Palm Beach blogs for raising record amounts for his campaign, dropping out, and then paying back a fraction of the money to contributors. http://weblogs.sun-sentinel.com/news/politics/broward/blog/2009/07/businessman_crushes_veteran_po_1.html

The tabloids all reported that Loeb and Vergara briefly split in May after a little spat. Insiders say that was probably after the Loebs presented a prenup to Vergara, who has a child from her first marriage. Although she’s doing very well from “Modern Family” and commercials, Vergara could never imagine the kind of money and lineage she’s walking into. She’s even beaten Drew Barrymore, who did very well this year by marrying the son of Arie and Coco Kopelman, of Chanel fame. But she’s still arguably a step behind Salma Hayek, who married billionaire Francois Pinault, whose father owns just about everything including Gucci and Samsonite luggage.

The Story of Iris Sawyer and Thomas Kempner: http://books.google.com/books?id=Sr0BAAAAMBAJ&printsec=frontcover#v=onepage&q&f=false