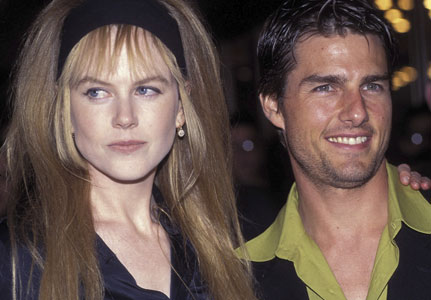 I wrote this story on March 8,. 2001. When Tom Cruise filed for divorce against Nicole Kidman a month earlier, the papers told a very stark story. Cruise tried to backdate his marriage to make it seem like it hadn’t lasted 10 years. It’s instructive to read this now, as Cruise prepares a rebuttal to Katie Holmes’s divorce filing. Cruise is using the same lawyers so far that he used in vs. Kidman: Dennis Wasser, and Cruise’s regular attorney, Bert Fields. Each of them had ties to now imprisoned private investigator Anthony Pellicano before he went to jail. Pellicano spied on Kidman. Holmes–so it’s alleged in the tabloids–is now being spied on herself.

Those who wonder what caused Tom Cruise to file for divorce so swiftly, at last here is an answer.

Under California divorce law, a couple married less than 10 years is not considered to have been in a “long term marriage.” Cruise filed his papers on February 7, citing the length of his marriage to Nicole Kidman at exactly nine years and 11 months. The Cruises were married on December 24, 1990; Cruise claims the couple separated in “December 2000.”

This would refute claims made in other publications that the Cruises renewed their wedding vows on Christmas Eve.

Donna Weaver, an expert family attorney in Hollywood, explained to me: “This gives a presumption that spousal support should not be considered.” In other words, Cruise is asking the court not to force him to pay alimony to Kidman. If he’d hesitated much longer, Kidman would have had a much stronger case to cash in on their ten years together a possible $300 million net worth.

On his divorce filing, Cruise also checked off box marked 7g, which indicates that he wants the court to enjoin Kidman from receiving alimony. He also checked off two boxes regarding custody of the couple’s children Isabelle and Conor indicating his desire to have a strong participation in their lives. “He wants more than visitation,” Weaver said.