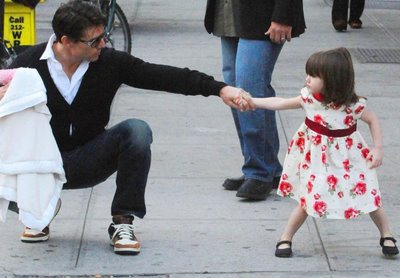 OK, your wife has just pulled a public exit, and taken your six year old daughter with her to a new apartment. Do you a) fly directly to New York from where you are –Iceland–to see the child or b) fly 3000 miles past New York to Los Angeles, to talk to your lawyers and your Scientology pals? Tom Cruise chose b)  yesterday even though he’s not actually divorced, has full parental rights, and many places to stay in New York. It’s not like he needs a friend’s couch to sleep on. Cruise owns an 8,000 square foot home here on West 12th St. He also is a regular customer at the Hotel Carlyle.

Cruise,too,  just stayed at the Greenwich Hotel in Tribeca when he was promoting “Rock of Ages.” There’s also a big Scientology center in the theater district. Plus, he not only needs lawyers in New York, but his own lawyers could have met him here. So what gives? Cruise hasn’t even seen Suri in almost three weeks (unless they Skype or do Face Time on iPhones).

But the press are lemmings. They pick up one story with no sources–usually from TMZ–and run with it. So today’s headlines are ‘Cruise flies home to LA alone on his 50th birthday.’ They’re also more worried about Katie Holmes being ‘stalked’ by mysterious, unknown spies– on Seventh Avenue, in building with a large supermarket, next to a big school, with two or three news vans parked outside and many other press people sitting on the sidewalk at the entrance–than ask any questions of their own.

It’s very depressing. So far neither Tom nor Katie has said a word, Holmes’s parents haven’t spoken, and not a single person is on the record about anything. But tons of “stories” have been launched. Not a single shred of fact has been included in any of them, including whether or not Katie will get any money from Tom in the divorce. (Harvey Levin of TMZ, who Alec Baldwin has fantasies of gutting like a fish, changes position on these things like a weathervane, or a puppet with unseen strings. Hilarious.)