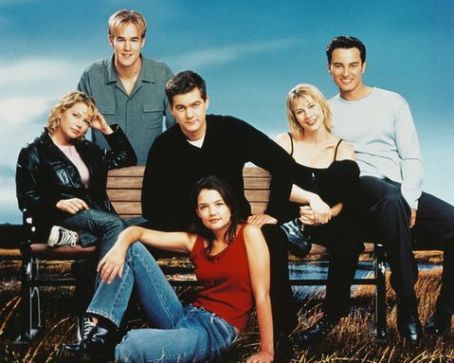 US Magazine is busy grinding out unsourced stories on Katie Holmes and Tom Cruise like crazy. But craziest by far, so far, is that Tom Cruise wouldn’t allow Katie to make a “Dawson’s Creek” reunion movie. If it’s true, then hats off to Tom. But it’s highly UNLIKELY such a thing was ever planned or suggested beyond an interviewer once asking Katie if she’s up for such a thing.

First of all, Michelle Williams now has three Oscar nominations. She is NOT going back to the Creek anytime soon. Not even to dip her toe in the water. Also her character died in the final episode. So the biggest star of the show wouldn’t be able to return, except as a ghost. They’re not making a movie without her.

Joshua Jackson is on “Fringe” and has lots of work.

Only James van der Beek might be interested, and that’s where the story may have come from. He’s currently on a terrible sitcom and could use a visit to the Creek badly. Alas, “Dawson’s Creek” is barely in syndication anywhere. It’s not “One Tree Hill,” which ran for many more seasons.The demand for “Return to Dawson’s Creek” is minimal.

And, more importantly: as of May, when I saw Jackson at the Cannes Film Festival, he hadn’t spoken to Holmes in seven years. She has not had any interaction with anyone from the show during her time with Cruise. None of them were invited to her wedding.

Holmes left her career, manager, and publicist at a high, then went on to make a lot of crappy movies during the reign of Tom. However, she’s back with her manager and her publicist, and will work a lot if she wants to once the smoke clears. So “Dawson’s Creek” reunion? Get a grip, people.