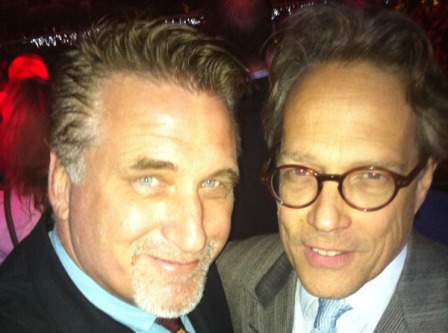 Daniel Baldwin didn’t make brother Alec’s wedding tonight to Hilaria Thomas at the old St. Patrick’s Cathedral. We’ll never know if he was supposed to get a silver or black wristband for the reception at NYU’s Kimmel Center. While brothers Billy and Stephen were there, Daniel was apparently in the United Kingdom. It’s a little unclear why, but he’s been Tweeting from there for a few days. He’s also now a Born Again Christian, from the Tweets. Almost every day his single Tweet is either “I’m up,” something about god, or an indication that he’s alive and well. That’s reassuring. Baldwin, who’s had a lot of public problems with alchohol and substances, seems to be living in Oregon otherwise. But in the last week he Tweeted that he visited with actor Albert Finney and his wife. He also sent out pictures from a race car event, went to horse races, and mentioned Wimbledon. He’s made no mention of his brother’s wedding. He did Tweet: “The LORD works in mysterious ways” on June 30th around 12am, the day of the wedding. It’s unclear why he’s in Britain: according to the imdb, he just made a low budget film that shot in the U.S. It’s also unclear if his references to the “Lord” are to god or to Lord March, his host in the UK at Goodwood Horse Races. (see picture).  Daniel, 52, is two years younger than Alec.

PS Guests at the wedding included Tina Fey, Woody Allen, Mariska Hargitay, and Baldwin’s daughter, Ireland. The exclusive on photos, etc was sold to People magazine, and will appear on Tuesday.