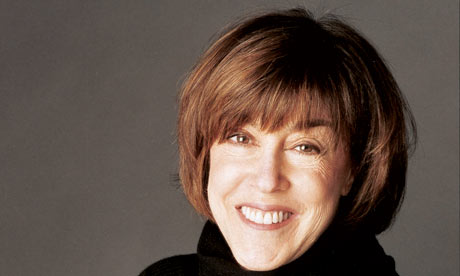 It’s going to come as a total shock to just about everyone but Nora Ephron is apparently gravely ill in a New York hospital. She is not expected to last the night. Ephron is one of the most popular figures ever in New York, a great writer, humorist, mother, wife, sister. I think of “Heartburn” and those recipes, and start laughing aloud. Or lines from “You’ve Got Mail.” Her family is with her. We send our prayers. It’s terrible. I’m told she’s suffering from a rare form of leukemia. Life is not fair. More to come…

PS Liz Smith wrote on her wowowow.com column that Nora had died. Liz and Nora are the closest of pals. Liz evidently received some hysterical jump-the-gun info. Nora’s illness is a shock to everyone–no one knew. So Liz’s heart was in the right place, of course. She is so upset about her friend. Nora worked with everyone in Hollywood and has many, many real friends who are going to be bereft as the news spreads tonight. She wrote “When Harry Met Sally.” She directed “Sleepless in Seattle,” “You’ve Got Mail,” “Michael,” and so many others. Her “Love, Loss, and What I Wore” was a spectacular hit off Broadway. From Tom Hanks, Rita Wilson, and Meg Ryan to Rob Reiner, Rosie O’Donnell, John Travolta, and on and on. Nora leaves her loving husband, Nick Pileggi, and her two sons.