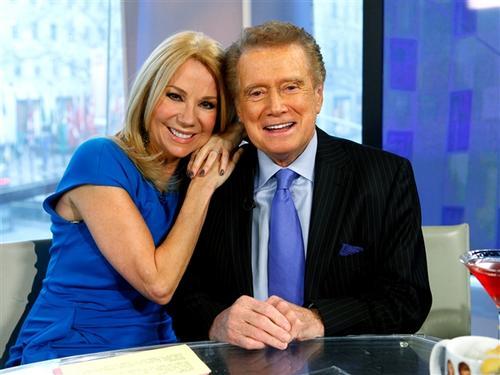 Regis Philbin and Kathie Lee Gifford back together on morning TV? It’s not as far fetched as you think. Last week, Regis filled in for Hoda Kotb and co-hosted the 10am hour of “Today.” It was a brilliant reunion of Philbin and Gifford’s glory years on their live ABC/Disney show. Now it seems that Hoda is the likely candidate to replace Ann Curry at “Today,” leaving Kathie Lee in need of a co-host. Regis has been off the air since November, is reportedly itching to do something, and is very comfortable with Kathie Lee.

Plus, as a source says, “NBC would love the publicity. And they’ll probably give him any deal he wants–three or four days a week, lots of vacation.” I’m told this is really happening. “And it’s not like ABC can be mad. Regis and Kathie Lee won’t be competing with Kelly Ripa at 9am. It’s an hour later.”

David Hinckley writes today in the New York Daily News that this is all a bad idea, but I disagree. Even if it’s for a year or two, and even if Regis is only on three days a week, the p.r. value is great, the shows will be very entertaining, and it will be a victory lap. Hoda, who’s from real news, gets “Today.” Ann Curry gets $10 million and a chance to do hard news again. Win win. Everyone’s happy. Bring it on!