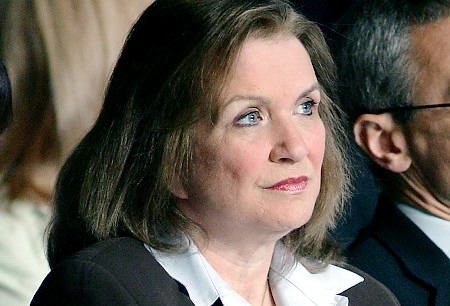 If we’re appalled enough by Rielle Hunter, now we know who to blame: Cary Woods, the producer of many indie films including “Scream” and “Swingers.” A very active presence in the 1990s and early 200s, Woods went on to start Plum TV in the Hamptons, According to Hunter in her non-informational book, ‘What Really Happened,” it was Woods who she went to in 2006 when she wanted to make documentary “films” or webisodes about then Senator John Edwards so she could stay near him. Years ago, Hunter’s friend Mimi Hockman told me there had been a Hollywood connection but never named Woods. Hunter trots him right out in the book–one of the few names she does give–and the guy who set everything up.

That’s all we know of Woods’s involvement because he–like her ex husband Kip Hunter and ex boyfriend Jay McInerney–makes the briefest of appearances in “What Really Happened.” Hunter gives little background in this book. So don’t fork over 20 bucks or more thinking you’re getting the whole story. You’re getting what Rielle Hunter wants you to know. She has one sister she likes and one she doesn’t talk to. Her father died in 1990, and she had his ashes. I couldn’t find any mention of a mother. Or how she morphed from Lisa Jo Druck to Rielle Hunter. She doesn’t say a word about her father’s scandals, or her life in the 80s in New York. It’s as if she just appeared one day, like Mary Poppins, to save John Edwards from a life of drudgery with wife Elizabeth and their three kids. (There’s just a thank you to her parents at the end.)

Hunter does list among her thank yous John Edwards’ two younger children with Elizabeth. There is no mention of Cate Edwards, his eldest surviving child, who was her own mother’s staunchest supporter. Indeed, there’s  no mention of Cate at all in the book, or of Wade, the 16 year old son whom the Edwardses lost.

Hunter does go on and on about one thing: Elizabeth Edwards, how crazy and awful and obsessed she was. She doesn’t care that the woman is dying of cancer. You see, it’s bigger than that. From page 205: “And while Elizabeth paraded around on TV as the poor victim wife who had overcome her husband’s one time only shortcoming…She was in a constant tirade, using her cancer and Emma and Jack as weapons in the war against a father trying to take care of his daughter [Hunter’s new born illegitimate child with Edwards]…All the pain she was experiencing was because of Rielle Hunter. She drilled that into their heads. My heart broke for those kids. How sad for them to grow up in a household like that.”