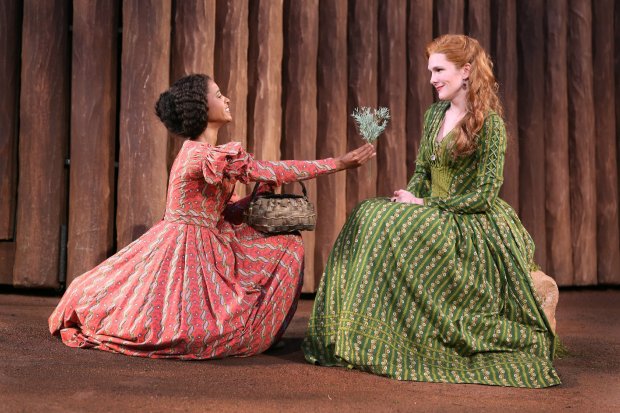 Lily Rabe stole the show last night as Rosalind in “As You Like It,” the 50th anniversary production of New York’s Shakespeare in the Park. Joe Papp was smiling from heaven as his Public Theater triumphed in 90 degree heat, putting on a hell of a fun season opener. As current director of the Public Oskar Eustis noted, Papp had to battle the formidable Robert Moses in 1962 to get the city to allow free Shakespeare in Central Park. Now we couldn’t live without it. On Monday night there was a big expensive fundraiser honoring Al Pacino with Meryl Streep, Kevin Kline, and Christopher Walken reading “Romeo and Juliet” to wealthy patrons.

But last night it was back to “for the people.” And the star was Lily Rabe, daughter of playwright David Rabe and the late great actress Jill Clayburgh. She co-starred with Pacino in “Merchant of Venice” previously, but now she’s in the spotlight in Shakespeare’s rigorous comedy that puts her on stage for most of the show. Oliver Platt, Stephen Spinella, Renee Elise Goldsberry and David Furr are her immediate co-stars. But it’s Rabe who holds the stage for all of the second act, and kept the audience so rapt that they didn’t mind the scorching night heat. Bravo!

In the audience: Patricia Clarkson, new Tony winner Judith Light, Julia Stiles and actor boyfriend David Harbour, Mickey Sumner (actress daughter of Sting and Trudie Styler), Platt’s “The Big C” co-star John Benjamin Hickey, proud papa David Rabe, and loads of New York actors fanning themselves with the program. (It doesn’t work!) Clarkson, by the way, heads to the Williamstown Theater Festival in Massachusetts for two weeks this summer. She’s going to bare her best in “The Elephant Man” with Bradley Cooper and Alessandro Nivola. I’m sure it’s already sold out! On Saturday the three actors are meeting at Clarkson’s place to run through their lines for the first time. See what actors do for us? You’ll be at the beach.