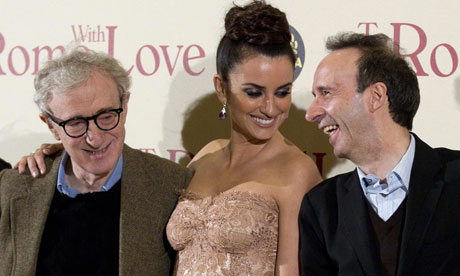 Woody Allen and his wife, Soon Yi took one look at the premiere party laid out for them by the Hollywood Reporter at Casa Lever House last night, and split. I mean, a party that was meant to be held out doors in 100 degree heat? They were gone. Penelope Cruz skipped the party for “To Rome with Love” altogether. All three had already done their time at the screening at the Paris Theater, taking pictures and greeting guests. But sweltering heat and then inside Casa Lever House, the noise level was just beyond human.

Nevertheless, Alec Baldwin did make a go of it at the screening and at the party. Some other celebs: Debra Winger, Julianna Margulies, director Paul Haggis, Jon Hamm and Jennifer Westfeldt. Greta Gerwig, who’s in “Rome,” came with Noah Baumbach. Chris Rock was there, so were Regis and Joy Philbin. But no one could blame Woody: the party was the absolute expression of his Groucho Marx line about not wanting to be a member of any club that would have him.

So what’s the story with “To Rome with Love”? It is first of all, very funny. Second, more than Allen’s movie “Celebrity” from several years ago, “Rome” addresses the obsession with fame, making good, and being accepted. It was kind of strange that the Reporter was sponsoring the party since their reviewer, Todd McCarthy, panned the film. (Maybe that’s why Woody left.) McCarthy, with whom I often agree, is wrong about “Rome.” There are plenty of strong performances–especially from Roberto Benigni, Alec Baldwin, Ellen Page, and Penelope Cruz.

The Benigni part of the film is my favorite. “Rome” is full of different stories. Benigni’s is about a simple Italian man who awakens to find himself a celebrity. He’s famous for no reason. Essentially, he’s the Kardashians. It’s a fable, exceptionally well told, about celebrity. But everyone in “Rome” is aspiring to something they consider better– social acceptance, career advancement, etc. And yes, it’s very funny. Woody plays a retired opera director who stages a hilarious idea of opera while vacationing in Rome. Judy Davis is his droll and supportive wife.

I do think after the massive success of “Midnight in Paris,” Woody is going to find it hard going with “Rome.” It was that way after “Annie Hall.” But “To Rome with Love” is a big meal of ideas and laughs. It’s the perfect antidote to the stifling heat. And Penelope Cruz has never been sexier or smarter.