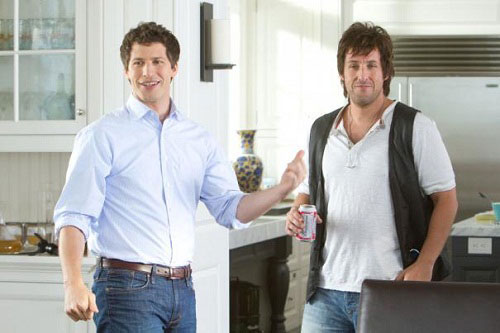 Wow. Even though, really, “Rock of Ages” is a better movie in about 30 ways than “That’s My Boy,” bad things are happening at the box office. On Monday and Tuesday, “Rock of Ages”– with Tom Cruise as the nominal lead–has started to fall apart at the box office while Adam Sandler’s “Boy” has held on. Indeed, if the trend continues today and tomorrow, “That’s My Boy” will pull ahead of “Rock” even though it’s playing at fewer theaters. As of right now, they’re almost tied at $17 million plus change. When the weekend finished, “Rock” was ahead of “Boy” by about a million dollars. But on Monday “Rock of Ages” started to drop, and on Tuesday it fell further below. Adam Sandler obviously has a few dedicated fans left.

I didn’t intend for this piece to be a review also of Andy Samberg’s “Celeste and Jesse Forever,” which I saw last night. Samberg co-stars with Sandler in the hideous boy, although he keeps his head low and stays out of sight. “Celeste and Jesse,” which opens in August, is going to erase this whole episode. It’s a fine romantic comedy, a little bittersweet and totally adult in its outlook. It’s a slam dunk date movie for people in their 30s, sort of like “(500) Days of Summer.” Rashida Jones, daughter of Quincy Jones and Peggy Lipton, who’s been doing great on TV (“The Office,” “Parks and Recreation”) and in small movie roles, hits a home run as the star of this film. It’s like Melanie Griffith in “Working Girl.” And Samberg os just great.

But “Rock of Ages” looks like it’s going to be a total wash at this point. Something really went wrong. At least it vindicates my feelings about groups like Journey, Kansas, and Poison. Ugh.