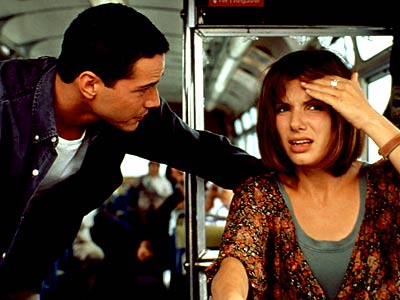 Imagine a now classic movie with a different cast. That’s what producer Mark Gordon revealed recently at the recent Producers Guild of America Conference. LEAH SYDNEY reports that Johnson’s first choices for “Speed” weren’t Keanu Reeves and Sandra Bullock. “We offered it to everybody but Keanu Reeves.  We desperately wanted Billy Baldwin and Halle Berry.  Dennis Hopper was our 97th choice. I didn’t think it would work.  Before Speed  I couldn’t get anyone on the phone, then everyone was calling me.”

The Producers Guild conferences always produce a lot of funny stories about the making of films. At the “Today’s Hit Business” panel, Mark Gordon, (Criminal Minds, Source Code, Saving Private Ryan,) and who is the co-president of the Producers Guild along with Hawk Koch spoke with legendary Producer David Picker.  David recounted the story of how on a film with Peter Sellers, he had to move Peter and his entourage from the Regency Hotel at 2am to the Plaza Hotel because Peter was convinced there were poltergeists in his room.

At the “Game Changers, Where Movies Should Be Going” panel, Mark Johnson (The Notebook, Rain Man, Diner) commented on the economic realities of producing. “This is a really exciting time because we have to be more inventive and resourceful than we had been in the past. ” Michael De Luca ( Moneyball, The Social Network, 21,) quipped: “Moneyball was my dream project.  It took me eight years and I’ve sworn off dream projects since then.  Amy Pascal’s passion for it kept it alive until Brad Pitt found it.”  On the 3D question that is still not totally embraced in filmmaking, Doug Wick (The Great Gatsby, Lawless, Gladiator,) said, “3D is an extraordinary tool in the hands of a talented director, it adds a new dimension to storytelling.”

At the ‘Passion Projects: Making Films Everyone Says Will Never Get Made,’ Brian Grazer (Beautiful Mind, Apollo 13, American Gangster,) and Peter Berg, (Battleship, Hancock, Friday Night Lights) Brian reiterated that in order to be a Producer one has to be, “kind of crazy and very resourceful. Playing too rough or too nice is both a problem.  Unless I’m making someone angry at least once during a movie I’m not getting anything done.”

Berg agreed and said that an “insatiable curiosity about everything is a must.”  He also commented on the disappointing performance of his latest film, Battleship.  “Battleship did under perform here in the US, but has done well worldwide. Sometimes films work or don’t.  The concept, the money, it was all so intense. Despite everybody’s best intentions, sometimes movies run away from themselves.  At the end of day, that’s what it was.”

Mark Gordon added, “Everybody’s afraid and with fear comes dishonestly.  It’s important to be nice and keep your word. When it comes down to it though, I’m really a plumber; I know how to make the pipes come together.”