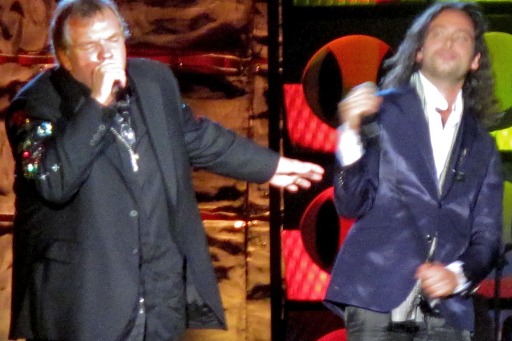 One of the great headlines from last night’s Songwriters Hall of Fame: Meat Loaf’s famous 1977 album “Bat out of Hell” is headed to Broadway. Apparently the songs written by composer Jim Steinman were originally intended to be the score for a decidedly different kind of “Peter Pan” musical. When that didn’t work out, the songs were re-worked into the Meat Loaf album. Some of the original problems included dealing with the J.M. Barrie estate’s objections to the Steinman vision of Neverland. Now, somehow, that’s been cleared up. Now “Bat out of Hell” is going to be presented — with other Steinman Meat Loaf songs–as a meditation on Captain Hook and friends. The character of Wendy will be one who’s been waiting 20 years–and is now 38– for Peter to return. He’s still 18. Maybe they find “Paradise by the Dashboard Light.” Anyway, producers had hoped to try the show out in London. But Steinman, who lives in Connecticut, doesn’t travel much. So “Bat” will beat its wings closer to home. The show will not include any of Steinman’s songs for other artists, including Bonnie Tyler’s immortal “Total Eclipse of the Heart.”