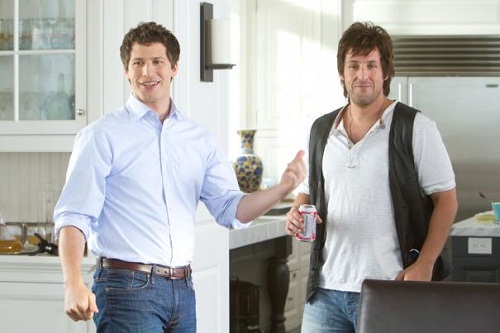 Adam Sandler’s cavalcade of junk continues to add garbage to the film canon. His new one, called “That’s My Boy,” opens today with a lowly 17 on Rottentomatoes.com. Now he plays the deadbeat absentee dad of “Saturday Night Live” star Andy Samberg. This will the movie Samberg remembers as almost killing his exit from the comedy show. How does Sandler continue? And who is actually going to see these things, one after another, annoying, obnoxious, written for the brain dead? Even as we speak he’s shooting “GrownUps 2,” as if the first one hadn’t been plenty. The amazing thing is, no matter how bad they are, Sandler finds an audience for them. Last November his awful “Jack and Jill” still eked out $150 million worldwide. Granted, it showed some erosion of his box office, but those numbers aren’t bad. Five $100 million movies precede that one, all them gloriously stupid and imbecilic. It’s too bad, because Sandler is capable of doing better work. You’d think by now he’d be concerned more about a legacy than the money.