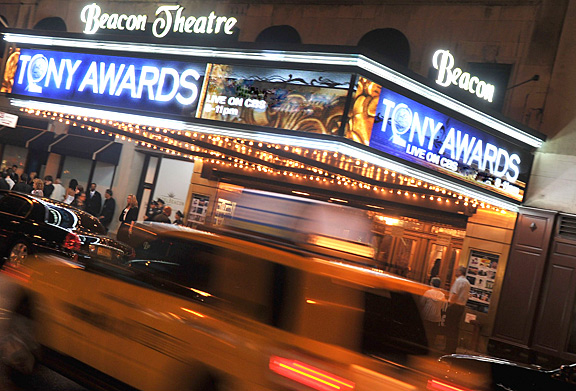 Tonight’s Tony Awards on CBS may turn out to be a big ratings winner. For once, the Tonys have clear sailing all night with very little real competition on the regular broadcast networks. Almost everything else on the tube tonight is a repeat–from “American’s Got Talent” to “The Simpsons.” Everything on Fox is a repeat. ABC has two first run reality shows–“Secret Millionaire” and “Exteme Makeover.” NBC has just “Dateline” that’s new and then the “Talent” repeat. The only real competition, off network, on cable, will be “True Blood” on HBO and “Mad Men” on AMC. So it’s up to Neil Patrick Harris and the Tony producers–the ball is in their court. They’ll have a slew of stars presenting and performing, and hopefully enough to keep viewers who dip in to see “Once” go up against “Newsies” for Best Musical among the many unknowns of the night. Some of the stars expected include Jessica Chastain, Hugh Jackman, Nick Jonas, Amanda Seyfried, Jim Parsons, Paul Rudd, Ellen Barkin, Angela Lansbury,  Candice Bergen, Christopher Plummer, James Marsden, Mandy Patinkin and Sheryl Crow. Bernadette Peters should be there, too, although last night she failed to show up for her Lifetime Achievement Award at the pre-Tony cocktail party.