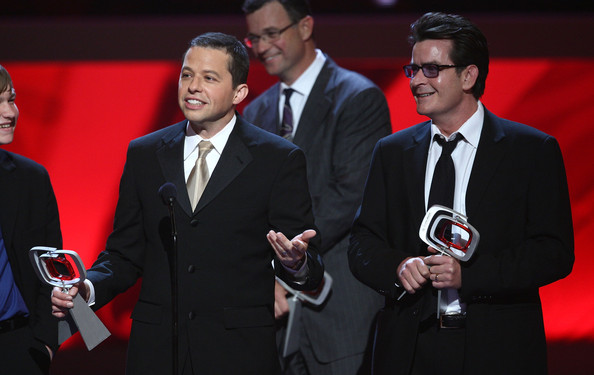 Jon Cryer came to New York last night and did a nice favor for his mother, actress Gretchen Cryer. He was the host of the 50th annual Dramatists Guild Fund dinner. Gretchen runs the event, and needed a star host. It was one of those amazing New York night, as the Guild honored composer John Kander, co-author with the late Fred Ebb of “Chicago” and “Cabaret.”

Before the show started, I asked Cryer if he ever did hear from Charlie Sheen, his partner for 9 seasons on “Two and a Half Men.” And the answer? “Never.” Cryer said he’d heard from others that Sheen had tried to call him. “But my phone indicates otherwise,” he said. It’s a puzzlement, that’s for sure. Sheen simply left the show and the cast, went crazy nationally, and has never circled back to apologize or pick up the pieces.

Meanwhile, the Dramatists dinner, in the ballroom on the 36th floor of the Mandarin Oriental Hotel, was like an old fashioned New York night. Joel Grey performed “Wilkommen” from “Cabaret,” and other terrific performers included Karen Mason, Chita Rivera, Bebe Neuwirth, and Karen Ziemba. Christie Brinkley, who’s been in “Chicago” lately, introduced Neuwith and Ziemba.

But the star of the night was Liza Minnelli. She arrived on time, sat through the dinner, and then closed the show with three boffo numbers– “Cabaret,” “And the World Goes Round,” and finally, “New York New York.” She was sensational. Liza also sang “Anywhere You Are” from her new “Liza Minnelli Live At The Winter Garden CD.” She told me: “John Kander invented me. He didn’t want me to Judy Garland’s daughter. He wrote Liza with a Z for me. It took him two hours and I learned it in 20 minutes. It changed my life.”

As for “New York, New York”– it was written for Liza to be used in Martin Scorsese’s movie of the same name. Hers was the original recording. She told me: “One day Uncle Frank (Sinatra) called me and said he was playing New York and he needed a good opening number. Could he do my song? What could I say? He was my uncle Frank.” She paused. “The difference is, with him it sounds like he’s already in New York. With me, it’s the promise of coming to New York.” And you know what. she’s right. And despite everything that’s happened in her crazy life, Minnelli rocks. I’ve rarely been that impressed.

By the way: what does the Dramatists Guild Fund do? It’s a little like MusiCares for theater people. It takes care of actors, playwrights etc who need medical care or housing or other necessities but can’t afford them.