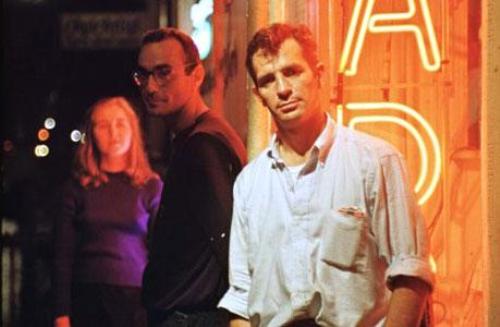 Jack Kerouac’s eternal novel of youth and frienship, “On the Road,” is finally a movie after 55 years in publication. You can look at this two ways: it should never have been done because Kerouac is like mercury. On the other hand, the fact that Walter Salles tried it, and did as as he could, should be applauded. My feeling is, “On the Road” at Cannes is too long. It needs cutting. But Salles can only be commended. And really, after all this time, it’s nice to see Sal, Dean, and Carlo—aka Kerouac, Neal Cassady and Alan Ginsberg–come alive on screen.

The script, by Jose Rivera, captures a lot. It misses some, too. But “On the Road” is like that. Rivera got the travel, poetry, and look right. It’s the interior lives of the characters that suffers. Salles has filmed the book faithfully. In doing so, it’s as if we’re observing “On the Road” rather than experiencing Sal’s adventure. This will frustrate critics and Kerouac scholars.

But the performances and filmmaking are strong. Sam Riley as Sal, Garrett Hedlund as Dean and Kirsten Dunst as Camille make strong impressions. Elizabeth Moss nearly steals the movie in a powerful, and jolting scene. Tom Sturridge, the latest actor to play Alan Ginsberg (James Franco was so good as him in “Howl”) puts on the heavy black glasses and does a fine turn. Kristen Stewart and Amy Adams, in smaller roles, are also excellent. Stewart, trying to break out of the “Twilight” world, will get the most attention for appearing nude and in some eye opening sex scenes. Adams is just always great. (And wild looking here, also breaking her goody two shoes image.)

Francis Ford Coppola has been been trying to make “On the Road” since at least 1979. In 1994, I wrote a piece in NewYork Magazine back then about a casting call he put out for the characters. His name is on the film as exzecutive producer. But this is Walter Salles’s film, coming after his amazing “Motorcycle Diaries.” He captures the sex, drugs, poetry and jazz capably. A little trimming and he’ll have it. Nice touches: Sal writing “On the Road” on Kerouac’s famous TeleType scroll. And Kerouac himself, I believe,  reading the end of the novel.

Joyce Johnson will publish a very important biography of Kerouac this fall. Many other Keouac and Beat scholars, like Regina Weinreich, will weigh in on the movie. The discussion is set to rage on. A lot of post-Cannes discussion has been divided on “On the Road.” The cast and crew also had one of the worst press conferences in recent history: either the foreign journalists didn’t get Kerouac, or the press at large was bored. Salles filibustered with his explanation of the film–very ponderous. But one thing he said was right: the film will re-boot the book’s–and Kerouac’s– popularity no matter what. And that won’t be bad at all.