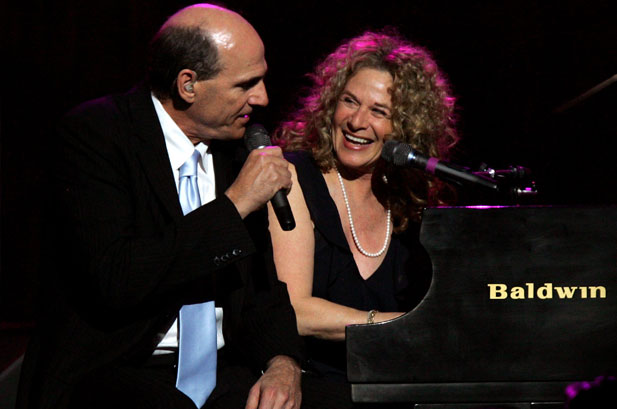 The worst interview experience I ever had with a celebrity–and there have been thousands–was with one person I really wanted to like. But in the early 90s, to promote one of her post-success albums, Carole King brought her mother with her to the Paramount Hotel for our lunch. She said, “I figured if I brought my mother, you wouldn’t ask me anything personal.” It was a nightmare. King wouldn’t talk about her Brill Building years or even “Tapestry,” her seminal, watershed album of 1971. She mostly wanted to discuss conservation in Idaho, a subject New Yorkers–this was for the New York Daily News–didn’t much care about. She also indicated that she didn’t care much for Neil Sedaka, her childhood friend and teen songwriting buddy from the Brill era. When the story was published, she fired her publicist, a very sweet woman.

Later, Neil Sedaka told me a story. His adult son had run into Carole on the street and introduced himself. King responded: “Tell your father to stop talking about me in interviews.” Nice.

Now we have a new memoir from King, which I downloaded (publishers don’t send or promote books) for my iPad. After reading “A Natural Woman,” I felt like I needed a Xanax. It made me think about creativity and the people who have it, why geniuses are crazy, and completely self-absorbed. Basically, King marries her childhood sweetheart, Gerry Goffin, and they have tons of hits with music publisher Don Kirshner at the Brill Building. There’s almost no mention of Sedaka, but there’s one interesting section about how she wrote “The Loco Motion” for Little Eva. She has two daughters with Goffin very young–when she was 18 and 20. They move to L.A., he drops acid and loses his mind, she divorces him.

In 1970-71, she meets James Taylor and Lou Adler, records “Tapestry,” has five or six really top charting albums in a row. She marries her bass player, Charles Larkey, and has two more kids. This man must be a saint. Because King drop kicks him, and basically from 1976 through the early 80s relegates him to the parenting of what she calls her “Larkey children.” (The “Goffin daughters” evidently raise themselves.) She moves to Idaho with a homeless psychotic who

abuses her, marries him, and he dies of a cocaine overdose. Then she takes the younger kids, moves further into Idaho, becomes a Mountain Woman, buys a big ranch, marries again, sues the town over an access road, and makes a lot of enemies.  She gets another divorce. (That’s four marriages.) Larkey, the saint, takes care of the kids in L.A. because they don’t want to live in their own private Idaho.

There’s no mention of Carly Simon and little of Joni Mitchell, each of whom were featured with King in a good book by Sheila Weller called “Girls Like Us.” I have no idea why, after 300 pages, or how, Carole King wrote “You’ve Got a Friend” or “Up on the Roof,” two of the best songs of the modern era.  The book should have been called “A Difficult Woman.” She comes across as the kind of person who willfully makes mistakes, and still defends them. There are a couple of anecdotes about Paul McCartney, John Lennon, and Bob Dylan, but they’re not very informative. It’s a shame.

For someone who supposedly writes personal music, there’s not a lot of introspection.  I mean, she became a grandmother at forty four. That’s pretty young. Goffin just disappears (when in fact he’s been very much around for years). What were the consequences of literal laissez faire child raising? (Well, she’s properly proud and surprised that the two younger kids finished college and one got a PhD.) I was very sorry to read that the coke-addicted homeless husband abused her, and for so long. He also stalked her and terrorized her band. That was a shock. But it only ended because the guy OD’d. Even King can’t say why she allowed it to continue.

A few years ago, Peter Asher resurrected King with his friend and client James Taylor. Asher recreated for six performances Taylor and King’s 1971 shows at the Troubador in West Hollywood. There was supposed to be a DVD issued after that, but it took at least two years because King stalled, hemmed and hawed. Then King parlayed that into a tour, documentary and best selling album with Taylor. There’s no mention of Asher having done this. The book just ends quickly, rushed, as if it were all meant to be. So weird. We hold our teen idols up on such a high pedestal. Carole King is immensely talented singer and songwriter. But “Natural Woman” is better left avoided in order to continue enjoying the music.

And on that music note–this is the real dichotomy of Carole King–she’s also released an album of her rare demos. It includes her version of the Monkees’ “Pleasant Valley Sunday” and a bunch of other gems. I’d buy the album and skip the book. That’s the Carole King I want to know.