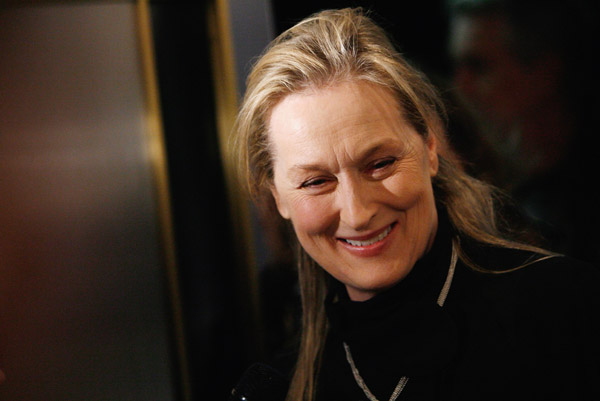 Yesterday’s big news: Meryl Streep and artist husband Don Gummer donated $20,000 to two schools, and fellow actor Viola Davis has been involved. It sounded very nice, and it was done before the Oscars. But a closer look reveals that the Gummers have quietly been giving away millions for the last several years without any fanfare. Their Silver Mountain Arts Foundation has donated close to $2 million to Vassar College alone in the last three years.

According to the foundation’s tax filing, Silver Mountain pays no salaries. It just gives and gives- t0 arts projects, health organizations, etc. The donations are in a range from $1000 to $1 million. It’s quite extraordinary and it’s been going on for years.  The Gummers are annual donors to the Opus School in Harlem, the setting of Meryl’s Oscar nominated performance in “Music of the Heart.”

In 2010 alone, they gave away $2.13 million–about half of it to Vassar, but $100,000 to Oxfam America, and another $5,000 apiece to things like New York’s City Meals on Wheels and Coalition for the Homeless. They’re very giving to local charities in their Connecticut neighborhoods, and support museums in Boston and Illinois. Last year they even gave $200,000 to the National Women’s Museum in Alexandria, Virginia.

Charity and largesse are not the reasons you get awards, however. I’ve read some weird stories in the last 48 hour about how “shocking” it was that Streep won the Best Actress Oscar on Sunday night for “The Iron Lady.” The fact is that Viola Davis gave a beautiful performance in “The Help.” She is now one of our top actresses. But nowhere in “The Help” are there the quantifying moments like Streep has over and over again in “The Iron Lady.” Even if you don’t like the conceit of the film–using Margaret Thatcher’s senility to frame her recollections–nothing can be taken away from Streep’s superior performance. She doesn’t do impersonations. The reason she’s called our finest actress is because she creates a character from scratch. In “The Devil Wears Prada” she wasn’t Anna Wintour; she was her own sensational act of will. The same thing can be said in her landmark work like “Doubt” and “Sophie’s Choice.” She subsumes. It’s remarkable.

Americans don’t have much investment in Margaret Thatcher. We don’t have an emotional attachment to her. Many people loathe her for her politics. The trick was to make Thatcher sympathetic enough to follow her through her key moments as Prime Minister and understand her as a human. When I first saw the movie I wrote on Showbiz411 that it was impossible to evaluate the actress. She was acting at an incandescent level. I felt bad that Jim Broadbent was overlooked; he was so fine. But Streep is a tour de force. This is no put down of Viola Davis, or Michelle Williams, Glenn Close, Berenice Bejo, Rooney Mara, or any of the other nominated actresses. Remember when an actress was needed for one scene in “Doubt” to go up against Streep, John Patrick Shanley sent in Viola Davis. We’re playing in the major leagues here. But there was no trickery in getting Streep the Oscar. When the full Academy voted, they were sending a referendum–how lucky we are to have Meryl Streep for her passion and consistency. And then on top of that, the quiet charitable work. Amazing.