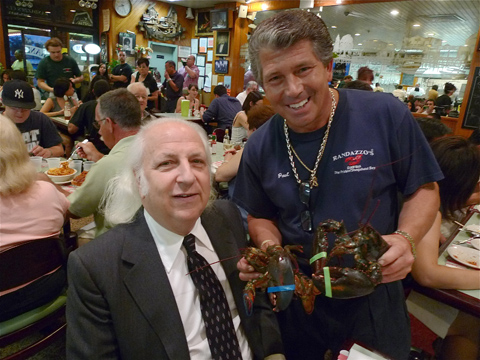 I rarely gasp at news of a death, but Page Six is reporting the passing on Saturday of Steven Greenberg. I worked for Steven–he tortured me, often with good humor–for the three years he owned and published “Fame” magazine from 1988-1991. He had previously owned the Roxy roller disco, and was infamous on Wall Street for being a stock promoter. Before the Roxy, he’d promoted all sorts of things besides stocks including Commodore computers. He was involved in some other scandal involving a carpet cleaning company.

He ran his empire– called Anametrics– from the 67th floor of Rockefeller Center–what is now known as Top of the Rock. He’d inherited the offices from Don King. You took an elevator to the Rainbow Room, then a separate private lift to an aerie he shared with business partner Michael Scharf. The place was dripping in Art Deco pieces he’d bought, mostly on Madison Avenue. Some of it was valuable. Some of it we called “Art Drecko.” He had a conference table and chairs from the USS Normandy. His desk and most of his own office was Chinese black lacquer. Even though he had the best view in Manhattan, he kept the heavy red velvet drapes closed. At night he roamed around Manhattan in his chauffeur driven stretch Mercedes. With his white hair he resembled Benjamin Franklin. He wore nothing about custom made navy blue pin striped suits that cost–then–$3,500–and monogrammed French cuff shirts.

Steven had an entourage. Mostly it was the late Margaux Hemingway, whom he adored, and Elizabeth Ray,who was infamous from a Washington DC scandal. He’d helped her reinvent herself with a book and branding called “The Washington Fringe Benefit.” They were all inseparable. He loved his uncle so much that he gave him a job in the Xerox room just to keep an eye on him. Most of his dates were very young women with short dresses and little knowledge of English. When you asked them what they did, they said they were “psychology students at St. John’s.” Whatever. It was all in good fun.

In the mid 1980s, Steven found Andy Warhol and what was left of his crowd. He was obsessed with being at the hottest “in” places–150 Wooster, Nell’s, MK, Canal Room, Elaine’s, Le Cirque–with Bianca, Calvin, Liza, Halston. He had to be in the right place with the right people. And have the best table. “Rawjahr,” he’d say in his thick New Yawk accent, “come sit here, I want you to meet–” and it was some guy who owned oil fields, malls, circuses, a country. He was crazy and lovable. In retrospect, I should have made a documentary about him.

When Andy Warhol died in 1987, Steven bought a of stuff at Andy’s auction. He was obsessed with Andy, with Basquiat. He knew what would accrue in value. He hired the very eccentric Gael Love, from Andy’s “Interview” magazine, to edit a new monthly called “Fame.” I was the Articles Editor. Steven was an enthusiastic publisher with no taste. But he could sell ads, and was always selling, selling, selling. He nixed an exclusive cover on Madonna because he didn’t like her. (We had to run the piece inside; it caused chaos.) He had screaming fights with Gael, and once threw a table at her. (I think he missed.) He was a little erratic. It turned out the whole time we were doing Fame, he was being investigated by the SEC for insider trading. Eventually he paid a large fine. Some of his collaborators went to jail. The magazine ended in acrimony.

I’ll tell you one thing he did that was kind of ground breaking: against his own wishes, he put Whitney Houston on the cover in 1990. I wrote the story; Gael really wanted it. Steven was nervous that no black celebrities were ever on luxury magazine covers. But he gave in, and it was wonderful. Whitney wore a Balenciaga catsuit. She was at the height of her fame. And the issue sold. So there.

I really cannot believe he’s dead. A few years ago I spotted him outside 230 Fifth Avenue, with lots of young people and barricades. He’d started a new nightclub on the roof. He was so proud, he took me upstairs to show me around. It was wild. I don’t know what it was or is and it’s still open. The food was terrible; the place was packed with good looking kids. Out front on the sidewalk, there was dozens more club kids waiting for entry. He’d become Steve Rubell. Steven was beaming. Steven sometimes stuttered when he was excited. “Look, look, look at this,” he said, arms wide open, gesturing to the Empire State Building. He was just one of those unique New York stories. He loved the city. He refused to get a summer house. He always wore the suits. As Frank Sinatra sings in the song, he “just wanted to be a part of it.”

My goodness–lymphoma killed him. This seems impossible. Not Steven. He was constantly calling wire services on Sundays to pitch stories and plug items. He said, “If you call them on Sunday, it’s slow, and they have nothing for Monday. They’ll run whatever you give them.”

So I’m writing this on Sunday night, and hoping some other sites pick it up. We’ve lost someone who was one in a million. And it just seems too simple. I guess I thought he’d just get in a balloon one day and fly off the roof of 230 Fifth to a nightclub he’d built on another planet. That’s where I’m going to pretend he is.