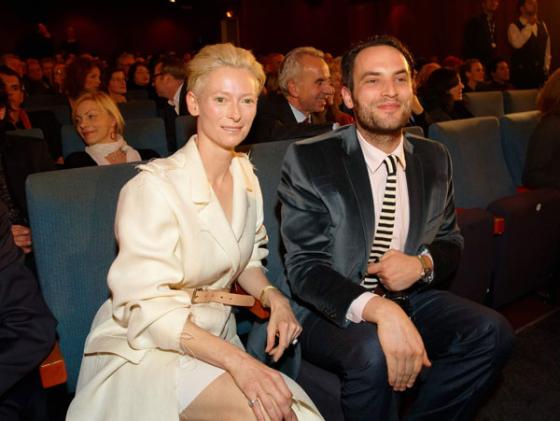 Former Oscar winner–but not current Oscar nominee Tilda Swinton--is just about one of our most favorite people. Last night she hosted artist boyfriend Sandro Kopp’s first American photo exhibition at the Lehmann Maupin Gallery on Chrystie Street– and it was pretty cool. I’m glad Peggy Siegal scooped us up from an early dinner at Bobby Vans in midtown–after being wowed by a knockout matinee of Audra MacDonald and Norm Lewis in “Porgy and Bess.” “Let’s see what this guy has done,” Peggy said. And away we went, where no less than another Oscar winner, Frances McDormand, and a rock star, Michael Stipe, were already enjoying the Skype manipulated photographs of a mixture of stars and others–including “Chicago” actor John C. Reilly and a large portrait of Tilda, taken while she was sleeping in front of her computer. The pictures are very clever. Fran’s portrait is comic and a little distorted. “All I know is, there was a bottle of wine involved,” declared the forthright Ms. McDormand. Michael Stipe told me that he’s essentially “retired” and figuring out the future. “My band disbanded,” he said of the legendary REM, as if we didn’t know. Kudos to Kopp for a job well done. And Tilda? Not unhappy about not being nominated for Best Actress for “We Need to Talk about Kevin.” “The fact that people are still talking about the film is great. I get to home to Scotland and not worry about it.” She has an Oscar for “Michael Clayton,” by the way.