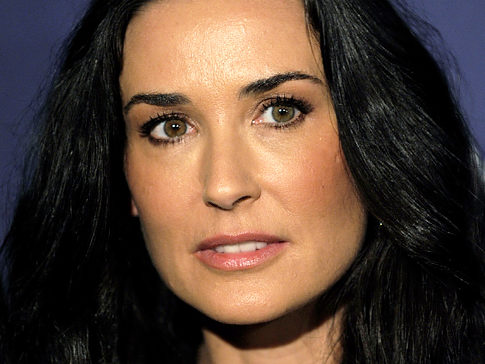 Reports come from TMZ tonight that Demi Moore was rushed to a Los Angeles hospital for substance abuse. She’s likely on her way to rehab. Usually I don’t report on this sort of private matter. But I like Demi a lot. However, when I saw her last week in Los Angeles at a party, we had a long talk. Her appearance and demeanor worried me. She was painfully thin, and wobbly. She had trouble staying focused. No one likes to write about this stuff, or to confront the people in question. I certainly don’t. But I’m relieved to hear that she’s in good hands now. Recently, Demi told an interviewer–I’m paraphrasing–that she didn’t think she could be loved. Imagine that, a woman admired by so many strangers, and yet terribly alone. She told me that night she was looking to make an action adventure movie. I was shocked. She looked like a twig that might break in half. The fact is, Demi Moore — despite her antics with Ashton Kutcher, etc in the tabloids- can be a damn fine actress. She was wonderfully brittle in “Bobby.” In “Another Happy Day,” which came out this last year, she captured the sadness and resilience of a second wife who’d done a great job as a stepmother but got no credit. We can only wish her well, and convey positive thoughts and good vibes for a speedy recovery.