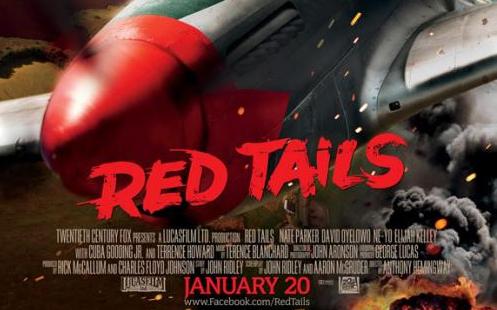 Let’s face it, George Lucas is loaded from “Star Wars,” Industrial Light and Magic, and all their subsidiaries. He’s financed “Red Tails” at $60 mil plus, which could mean  $80 mil since he’s paid for all the prints and promotion. Is it  a flush down the toilet? Could be. Boxofficemojo.com is predicting a $15 million weekend. The movie has a very low 33% score on RottenTomatoes.com. Not only that, the film has no word of mouth. Anyone who makes it alive or awake during a screening will not be recommending to friends. The film is interminable. An even worse showing for Lucas will be heart-wrenching; he is completely devoted to it, warts and all. This is admirable, because he knows how much it means to the history of the Tuskegee Airmen. But the stage seems set for a disaster. The only salivation might be in video games derived from the CGI airfights; that’s where the money will come back. And I guess the tax accountants can calculate a loss on whole. But oh what a missed opportunity. And I do think Lee Tergesen is in a tie for saying the least (nothing) in a movie with Michael Ontkean’s strange mime in “The Descendants.” Perhaps these were odes to silent film, “The Artist.”

PS George Lucas: I wish he’d return to the fun and passion of “American Graffiti.” His California has not changed so much. Maybe the music and clothes have changed, but the lonely wandering teen–in tough economic times–is a good story. George, phone home.