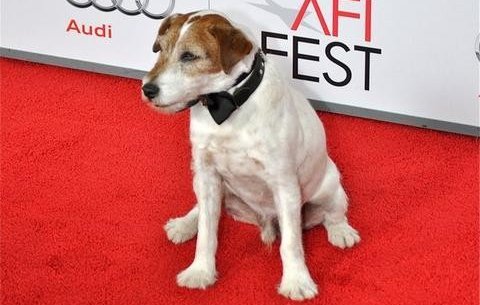 Fame–it’s a bitch. And that seems to be the case for Uggie, the Jack Russell terrier who nearly steals “The Artist” directed by Michel Hazanavicius. The delightful film won the Golden Globe award for Best Comedy/Musical on Sunday night. Uggie made his first national appearance, dancing with the cast and director on stage. But the next morning, I ran into Hazanavicius, Berenice Bejo, and Jean DuJardin at the Four Seasons while they prepared to tape a French entertainment show. It was just hours before they would receive 11 BAFTA nominations, securing their Oscar bid–nominations for our awards come on January 24th. So, one question: after all this time, did Uggie recognize you? “I’m not sure,” said Michel. “But I think so.” Berenice, shaking her head: “It’s a long time now, he’s had so much else to do. Plus, he lives here in L.A. Awards shows aren’t a big deal for him.” And Jean DuJardin joked: “You can’t even get near him now. Agents, publicists. He’s not the same dog!”