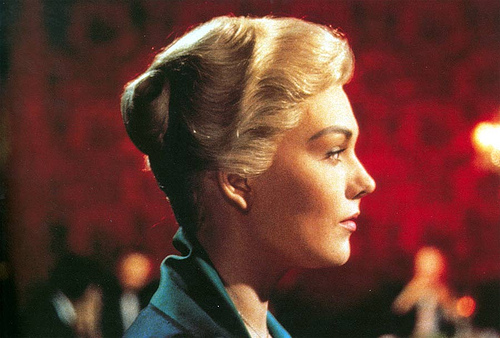 It sure is the silly season in Oscarland. Today, actress Kim Novak– a noted recluse so out of the Hollywood loop that I doubt most people under 50 know her name–took a full page ad in Variety. Her gripe was that the music for “The Artist,” the much loved silent film by Michel Hazanavicius, was taken from a movie she’d starred in over 50 years ago. Indeed, Hazanavicius credits Alfred Hitchcock’s composer, Bernard Herrmann. He’s discussed the fact that 20% of Ludovic Bource’s score comes from great movies of the past. The Academy knew it, and said that the 80% that was original was eligible for the Oscar.

Novak’s ad, so preposterous, makes it seem like she made the movie and wrote the music! (Well, it’s her one big claim to fame.) But this is a woman who shuns the spotlight. She might have written a letter or called someone. But take an ad out? Risk her Academy membership for maligning a film in public? What also concerns me is that her manager or pr or spokesperson is the dreadful Sue Cameron, a woman I tangled with last year when she hijacked singer Phoebe Snow’s funeral here in New York by giving a eulogy about herself. It was a travesty. Now Cameron is saying how “shocked” Novak was when she heard the music. Really? The woman hasn’t made a movie since 1991. Maybe she should listen to some others that quote Herrmann. How does she feel about all the films that riff on Hitchcock? Brian DePalma anyone?

Novak actually wrote: “I want to report a rape. I feel as if my body — or, at least my body of work — has been violated by the movie, The Artist.”

It’s hard to believe that Novak was so motivated by “The Artist” soundtrack–so full of original melodies and inventive work–that she called up Variety and read them a credit card number. Something smells fishy here. As for ‘body of work’–she acted in one movie directed by Alfred Hitchcock. Weird.