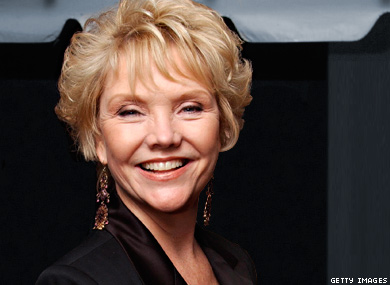 Starting today, “One Life to Live” winds down its 43 years with nine final episodes. It all comes to a big conclusion next Friday, January 13th. By then Victoria Lord Riley Buchanan Carpenter Davidson Banks (and maybe Buchanan again by Friday) will have seen it all. And Erika Slezak, her multiple Emmy winner portrayer for 41 years, will have played it all–literally. Her character, Victoria Lord, was conceived by Agnes Nixon as a riff on Tracy Lord from “The Philadelphia Story”– a bright young ingenue from a wealthy Philadelphia Main Line family. But that’s where things stopped since things happened to Victoria that would give Tracy nightmares: her father was murdered by his second wife.

Then Victoria was diagnosed with multiple personality disorder brought on by memories of her father’s sexual abuse in a secret lair underneath their mansion. He also fathered two children with one of Victoria’s school chums. Along the way, Victoria time traveled, visited heaven, an underground city, worked as a waitress in a Texas coffee shop, had twins by two different men (one of them was a cult leader). She survived breast cancer and had a heart transplant. Three husbands died. A daughter whom she’d forgotten she had also died. (The actress left for Hollywood.) Her two original siblings died and were replaced by two new younger ones. Her son had an affair with her father’s killer. Many people she knew died, but then turned out to be alive well after their funerals. (Contract disputes.)

Erika Slezak never batted an eye. Over the weekend there was a “One Life to Live” marathon on TV that showed her in all her glory. And this is what I’ll say after intermittent viewings between football games: Slezak was too good for soaps. But this is what kept the show going all those years. (That, and the dependably straightfaced Robert S. Woods, her longest running male co-star. He has to be cited, too.) No matter how preposterous it got, Slezak never gave into the silliness. She knew Victoria had one life to live, and she wasn’t going to squander it. She’s the Meryl Streep of daytime, and that says a lot.

Now a still beautiful mid 60s, Slezak should be hired immediately by HBO or Showtime for one of their dramas. She’s too good to just retire. She stole s recent “One Life” episode designed as a parody of soaps–playing a German maid the way Mel Brooks would have directed her. She’s been consistently brilliant. And she’s no scene chewer. She’s never given in to what has to have been an impulse. Her famous living room set remains intact. Only two other soap actresses who I can recall  played it with same elegance: Constance Ford on “Another World” and Maeve Kinkead on “Guiding Light.”

“One Life” goes off the air, and 50 plus years of New York soaps ends too. It’s truly the end of an era, thanks to greedy networks and megalomaniacal executive producers. The latter made the whole thing get wilder and wilder, choosing implausible stories and young, squeaky bimbos and himbos over real drama. Soaps resonated with viewers through the mid 80s because they were serious. But when camp and kitsch spread like cancer, the shows were over. After next Friday, only four shows will remain–all shot in Los Angeles, and all pretty bad.  A cancellation notice for “General Hospital” is imminent, so its time slot can be taken by Katie Couric next fall.

But I will set my DVR to see Victoria Lord’s final shows, and hope to god she gets a happy ending after enduring so much sturm and drung. And look forward to seeing Erika Slezak, Robert Woods, Jerry ver Dorn, Robin Strasser and a handful of their talented actors continue to work once the door is closed on “One Life to Live.”

PS “One Life” now joins “As the World Turns,” “Guiding Light,” “All My Children,” “Another World,” “Search for Tomorrow.” and “Edge of Night” in New York soap heaven. Fans miss them all. This is a shout out to Don Hastings from “ATWT.” You’re not forgotten, Dr. Bob!