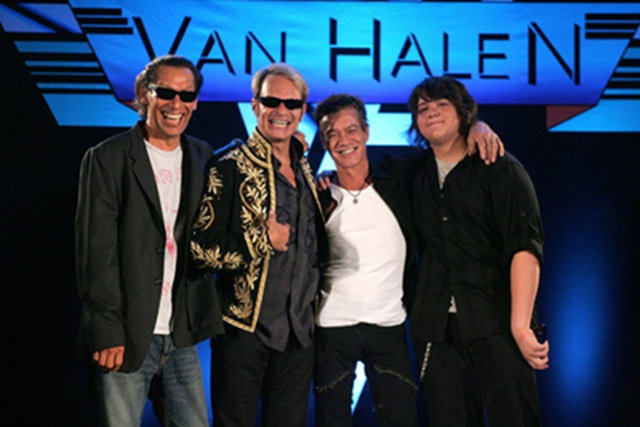 Get ready, because 2012 is going to seem like 1984. Van Halen is coming back. You remember Van Halen: Eddie and his brother Alex. Only back in 1984, when David Lee Roth was the lead singer, Eddie was married to reigning TV queen Valerie Bertinelli. Their son, Wolfgang, was born in 1991. Now hear this: Van Halen the band, with a reunited Roth, Eddie’s brother Alex, and Wolfgang, have finished a new album for Interscope. It was recorded all year — especially last winter and then mixed, and remixed–at Henson Studios in Hollywood with producer John Shanks.

Going by the enigmatic art work they’ve unveiled, the album will be released on February 7th, the Tuesday before the Grammy Awards. All signs point to a “surprise” appearance on the Grammy broadcast the following Sunday, February 12th. You can absolutely imagine producer Ken Ehrlich salivating over a show that opens with the first notes of “Jump”–especially since the rest of the show is going to be overrun by this week’s chart “acts.” (Maybe he can get the Van Halens to play with every group.)

The definite news: Van Halen tour tickets go on sale January 10th. All of this should be quite amusing considering that Roth, who always fought with Bertinelli, is said to despise her son. According to my sources, during the long, long time it took to make this album, Roth wouldn’t even speak to young Wolfie. (He turns 21 in March 2012, by the way. Feel old?) When they were recording last winter, the word was that Roth would not be in the studio when Wolfie was laying down bass guitar tracks.

So this should be as much fun as the Police reunion from several years ago, which also launched on the Grammy show. The only upside I can think of with a new Van Halen album and tour? That Roy Orbison‘s estate will get a lot of money for “(Oh) Pretty Woman,” which Van Halen covered in its heyday. The big question? Will the Van Halens let Roth, now 90 years old, perform his previously ironic medley (because he was young and they were songs associated with an older generation) “Just a Gigolo/Ain’t Got Nobody”?

There are many variables here, by the way. Van Halen had been rumored to appear on the Grammy nominations show on November 30th. But that was scotched and then denied. Their infighting is so notorious that it’s still possible none of this will come off as planned. The album that’s coming was almost on Columbia/Sony after not being on Warner Bros., their old label.

And the other irony: the Grammys are really a production of AEG Live at the Staples Center, an AEG house. But Van Halen is a Live Nation act. But it’s only rock and roll.  As they sing in “Jump”: “You got to roll with the punches and get to what’s real.”

By the way two identical websites — www.van-halen.com and www.davidleeroth.com–tour the new tour tickets and direct to each other.