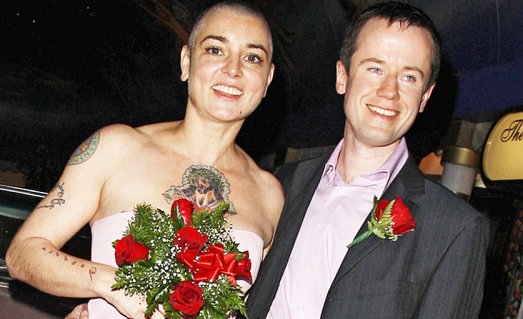 In Sinead O’Connor‘s most famous song, “No One Compares 2 U,” she sings: “It’s been seven hours and fifteen days/Since you took your love away.” Now  reports come that Sinead’s most recent marriage–in Las Vegas, with lots of hoopla–is over after just about that amount of time. The marriage lasted 18 days, according to her website. Something apparently compared to Barry whatever his name was.

She writes: “Dear friends, I had for reasons u will all understand, wished to keep this private but have been told today it is to be leaked in the next few days despite my best efforts. So I must now leak it myself so as the record is straight.

“Within 3 hours of the ceremony being over the marriage was kyboshed by the behaviour of certain people in my husband’s life. And also by a bit of a wild ride i took us on looking for a bit of a smoke of weed for me wedding night as I don’t drink. My husband was enormously wounded and very badly effected by that experience and also by the attitude of those close to him toward our marriage. It became apparent to me that if he were to stay with me he would be losing too much to bear.”

O’Connor notes, “A woman wants to be a joy to her husband. So.. U love someone? Set them free.”

She finishes her advisory: “He is a wonderful man. I love him very much. I’m sorry I’m not a more regular woman. I truly believe though it is painful to admit, we made a mistake rushing into getting married, for altruistic reasons, and weren’t aware or prepared for the consequences on my husband’s life and the lives of those close to him. He has been terribly unhappy and I have therefore ended the marriage. I think he is too nice to do so. And too nice to trap.”

And so Sinead beats Kim Kardashian and Kim Humphries, winning the title of shortest celebrity marriage of 2011. It wasn’t an easy task, coming in at the very end of the year. But this should prove that perseverance always pays off.