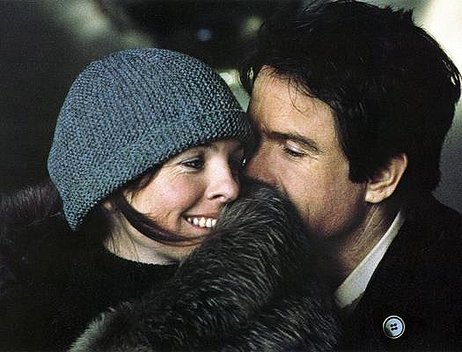 The absolutely terrific actress and filmmaker, now bestselling author, Diane Keaton, published her memoir about a month ago. I’m just getting around to reading “Then Again,” and getting quite a kick out of all the softly delivered gossip in this can’t put down read. Keaton is circumspect, but she does dish about past loves Warren Beatty and Al Pacino, as well as about the many endings that were proposed or shot for Francis Ford Coppola‘s ill fated “Godfather III.”

In 1989, Keaton had been dating Pacino on and off for quite a while. They’d gone through several hreakups and make ups. But interestingly, there is no mention of Pacino’s daughter Julie, who was born a month before the shoot began, to acting coach Jan Tarrant. Keaton, sources have said, didn’t learn that Pacino was the father until they were shooting the film in Italy, which led to the break up. The set was full of tension.

Keaton writes: “As we waited for the twelfth rewrite of the ending of Godfather III, I thought about the other versions. There was one where Talia [Shire] kills Eli Wallach, Al is blinded, and Andy [Garcia] breaks off with Sofia [Coppola] the minute before she is assassinated. After blind Al discovers his dead daughter on the steps of the theater, he blows his brains out.

“There was the one where Al is assumed dead but comes back. There was one where he is shot but lives, only to be killed on Easter Sunday on his way to church. There was the version where Al is gunned down at Teatro Massimo but Sofia lives. No one of us knew what to expect. Would this be the final, final draft or just one in a continuing series of attempst to end the safa of our erratic and entirely brilliant leader Francis Coppola?”

As it happened, it didn’t quite end the Coppola saga, but the great director never really recovered.

As for Beatty. Keaton writes that when she first saw Beatty on screen in “Splendour n the Grass,” that was it. “I’d never seen anyhing like Warren Beatty. By thing, I mean he wasn’t real. He was to die for.”  Then she met him. After their first meeting he wrote her a note telling her she was a movie star and could do anything she wanted. (This was after she’d won the Oscar for “Annie Hall.”)

“After I confessed how terrified I was to fly, Warren surprised me as I was about board a flight to New York. took my hand. walked into the plane, sat down still holding my hand, and never let go until we landed. Once safe on the ground he kissed me, turned around and flew back to L.A. On Valientines Day he bought me a sauna for one bathroom and a steam room for the other. He was full of magnanimous gestures.”

After reading Keaton on Beatty, you will have no doubt who Carly Simon wrote “You’re So Vain” about.  Well done!