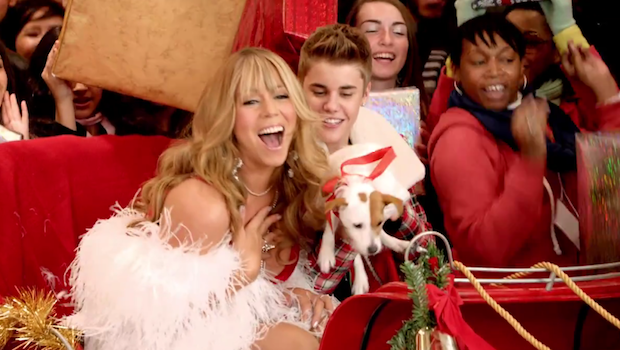 Last week I reported that Mariah Carey and Justin Bieber would be performing on “X Factor.” They were scheduled to sing “All I Want for Christmas Is You” on December 15th. But now I’m told that Carey’s set up — band, dancers, back up singers, make up, lighting, not to mention nannies (just kidding!) etc– was just too rich for the “X Factor” budget. The price would have come in around $300,000. Hey, it’s tough times for everyone!

“Mariah hasn’t performed live in about a year,” says a source. “She wanted to make sure everything was perfect. She certainly doesn’t sing to a track.”  And so a dream dies. But the possibility still exists of Carey singing on next year’s premiere, Meantime, I am told also that Mariah’s album with under-the-radar manager Randy Jackson is proceeding well. This could be her last album for Universal Music Group if she decides to join L.A. Reid at Epic/Sony. And Justin Bieber? Despite his enormous teen popularity, his Christmas album is being outsold by Michael Buble at a rate of 2 to 1.