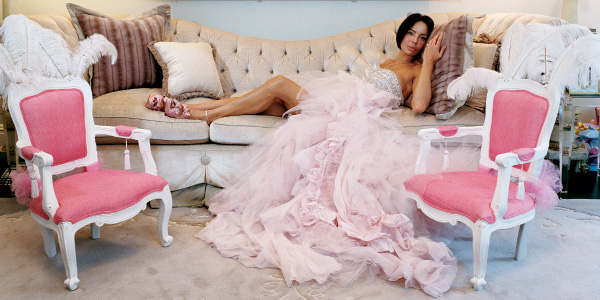 There may be no more “haute living” for Philip and Lisa Marie Falcone. The New York Times reports that Falcone, a big hedge fund manager here in New York, is in major trouble with the Securities and Exchange Commission. What the Times doesn’t report is that Falcone and his wife Lisa Marie had been  turning themselves into movie and pop music producers. The Falcones have four films on their resume: “127 Hours” with James Franco, “Win Win” with Paul Giamatti, “Mother and Child,” with Annette Bening and Naomi Watts, and the upcoming Reese Witherspoon film, “Mud.” Lisa Marie Falcone was featured last year in Bloomberg BusinessWeek (pictured here). She had started a firm called Everest Entertainment.

Now husband Philip’s Harbinger Fund, which is the source from which all his movie money springs, has been served with warnings of investigation by the SEC. According to the Everest website, the Falcones also seem to be underwriting a new all star album by hip hop/pop producer Swizz Beatz, who’s also the husband of Alicia Keys. The album’s title is “Haute Living.” The Falcones have also been very publicly involved in raising money and hosting big celebrity events for the High Line park, the former railroad track that runs along the lower west side that boats gardens and art installations. They’re each on the High Line’s board of directors. They made headlines by announcing a $10 million donation to the High Line. http://artsbeat.blogs.nytimes.com/2009/06/01/10-million-gift-for-high-line-project/

Harbinger has been served with a “Wells notice” by the SEC. The Times quotes the SEC report that there may be “violations of the federal securities laws’ anti-fraud provisions in connection with matters previously disclosed and an additional matter regarding the circumstances and disclosure related to agreements with certain fund investors.” Apparently there are questions about a $113 million loan to himself from a wireless project called Lightsquared. http://dealbook.nytimes.com/2010/11/12/harbinger-and-falcone-said-to-face-u-s-inquiry/

And there have been other questions raised by Republican politicians over donations made by Falcone to their campaigns. http://dealbook.nytimes.com/2011/09/21/falcone-under-fire-from-republicans-over-lightsquared/ A quick review shows that between 2007 and 2010, Falcone donated $107,000 to a variety of candidates in both parties who may have had some bearing on Lightsquared’s future. Some of the politicians subsequently returned the money. But most kept it. Big chunks went to the Republican National Committee of Minnesota, and to the national senate committees of both parties.

The Falcones paid $49 million for the mansion previously owned by Penthouse owner Bob Guccione. According to reports they spent around $10 million on renovations.