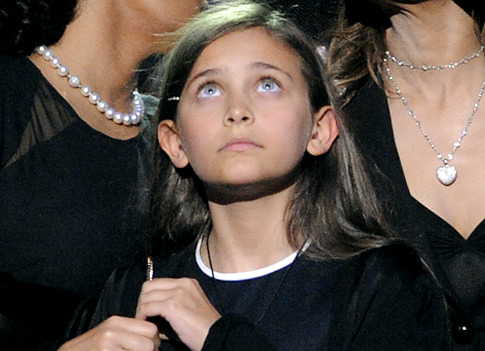 Paris Jackson–if she wanted to be in the movies, you’d think her grandmother would take her to Steven Spielberg or someone reputable or high class in Hollywood. Instead, Paris, who’s 13, is now being exploited for a movie that has no funding, a producer with no production credits, and a cast that includes such sterling movie actors as Larry King, his wife Shawn, and Joey Fatone of NSync. The website for “Lundon’s Bridge” has already been set up with Paris’s picture prominently featured.

And there’s a FUNDRAISING button on the website–the guy, Stephen Sobisky, doesn’t actually have the money to make his three part fantasy adventure. He’s using Paris as bait. And Katherine Jackson, the ill equipped grandma, has no clue. But let’s get this straight. Sobisky is a visual effects supervisor for B movies. He has not produced or directed one major motion picture. As we’ve learned from the recent “Gotti” mess, the rest of this is hogwash. Where are the Jackson kids’ lawyer? Where is a guardian? Sobisky will now fish around the world using Paris Jackson to try and raise money. And the little girl probably thinks this is going to happen, and be a big deal. Oy vey.

And please! “Fifty percent will be donated to schools”–really, what schools? What are they talking about? Fifty percent of what? It’s a shonda, as you say in Yiddish.

PS The book this is all based on, “Lundon’s Bridge.” is such a classic it’s self published by a journeyman Hollywood bit player named Dennis Christen. It’s currently ranked around number 86,000 on amazon.com with three reviews.