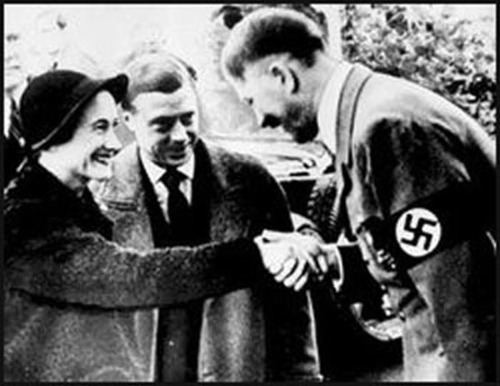 About twelve minutes into “W.E.,” Madonna‘s paean to the Duke and Duchess of Windsor, there’s an argument whether the ex-royal couple were Nazis and-or Nazi sympathizers. “It’s based on rumor,” says the popstar/singer’s stand in character played by Abbe Cornish. Then she blabs something about empirical evidence. Apparently, sometime in the making of “W.E.” Madonna learned the word empirical. She did not learn the word fact. Madonna does what suits her based on her own ideas. Facts are just a nuisance. Her African documentary, “I Am Because We Are,” was her limited view of Malawi, the truth and facts be damned. Now she’s re-writing history so it doesn’t interfere with her screwy notions.

Here’s the story about the former King of England, who abdicated to marry Mrs. Simpson: they made a trip to Nazi Germany and met Hitler in 1937. It’s widely documented. If Madonna doesn’t want to read about this, there are pictures. The couple was not there because the Duke “was desperate to avoid war.” He had already given up his job as King, and was basically on a life long bender. Once they made the trip to Germany, King George VI–the stutterer from “The King’s Speech” — pretty much banished them to Nassau in the Bahamas. Indeed, there are numerous books and reports of the couple continuing to socialize with fascists. It’s not a rumor.

As for the rest of W.E: it’s a movie about things. Madonna, like Oprah, likes stuff. “W.E.” is like a gorgeous shopping catalog, the kind guys throw out and women consume. There’s a painstaking precision to every tea cup and hairbrush. The people look like cardboard cut outs, or models from one of Madonna’s videos. The whole film has the look of a Chanel commercial, or Elizabeth Taylor‘s White Diamonds. I think my favorite character is Ernest Simpson, Wallis’s second husband, who’s being cuckolded and knows it. The Duke, ex King Edward, makes the people on “The Bold and the Beautiful” look deep. Andrea Riseborough puts her all into Wallis Simpson, but it’s like diving into a glass of water from a great height.

And speaking of height: somehow the Duke of Windsor, who five foot seven, is now a strapping six foot three. And a bottle blond.

Why is Madonna so interested in this dreadful woman and her idiot husband? It makes no sense. She’s not an intellectual, but she has street smarts. On the other hand, like Oprah, she was raised with very little. All this splendor must seem enviable. How can Abbe Cornish’s Wally — Madonna’s present day doppelganger who’s also obsessed with Wallis Simpson–resist leaving her marriage for a Sotheby’s security guard? He has a million dollar loft in Brooklyn with a baby grand piano and leather club chairs. Of course, first she has to exit her Park Avenue mausoleum. But life is so much richer in the outer boroughs.

And where does she go, besides Brooklyn? Only a receptionist in an art gallery, Wally gets an appointment in Paris with Mohammed el Fayed to read the unpublished letters of the Duke and Duchess. She’s not a journalist or a lettered academic. She’s really just a stalker. It’s hilarious. Better still, she says in their untouched Paris suite, and tries on all their things. So this is a fable. But it looks good, even if it makes not a drop of sense.