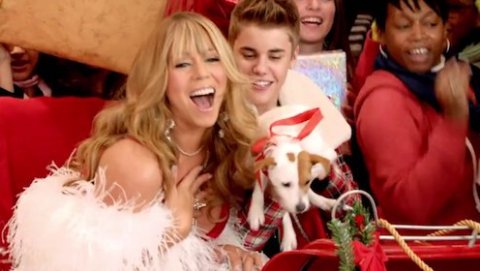 Exclusive: Mariah Carey and little Justin Bieber are set to perform on “X Factor.” Their December 15th performance will be of their new duet on Mariah’s classic hit, “All I Want for Christmas Is You.” Carey wrote the song and released it 17 years ago, in November 1994. (Wait! November 1994 was seventeen years ago? OMG.) Since then, “All I Want” has become a Christmas perennial. This year she re-recorded it with Justin Bieber, who sings back up in his new low register. He isn’t Perry Como or even Steven Tyler, but the keeps up with Miss 8 Octaves and doesn’t do too badly. Carey has said she will make a number of appearances on “X Factor” this season, largely because it’s controlled by her record company, Universal Music. Also, her former and future label chief, L.A. Reid, a is a judge. This is complicated because her unofficial manager and music director Randy Jackson is a judge and mainstay of “American Idol.” At any rate, set your DVRs to see the newly slimmed down Mariah sex up Justin on live TV. Let’s hope there’s no wardrobe malfunction…

…I told you a while ago –exclusively– that “Lord of the Rings” director Peter Jackson was funding a documentary on the West Memphis 3. This was despite the fact that Joe Berlinger, Bruce Sinofsky and their team have made three docs on the subject over the course of 15 years. Their latest, “Paradise Lost 3,” is on the short list for the Oscars. It should win, really. HBO will air it in January. But Jackson put up money for the WM3’s defense, so he figured he’d better get something out of it. He sent filmmaker Amy Berg to Arkansas, where she spread his money around to relatives of the WM3 and bought up their rights.

Now Jackson has announced that Damien Echols and his girlfriend, Lorrie Davis, are co-producers on the Berg film, and that it’s ready. They were hoping to get it into Sundance. But I think the Sundance people are too smart for that.  The Berlinger films are plenty, and tell the story sufficiently. It’s a shame that Jackson et al and Berg felt they had to barge in on a filmmaker’s long investment of energy, money and heart. I don’t understand why Jackson couldn’t have just supported Berlinger and co.

Note to Jackson and Echols: this column has not spoken to Berlinger or Sinofsky. But when the Jackson doc press release came out tonight, I had to say something. Real documentary filmmakers don’t purposely upset another’s work. And they certainly don’t go around a small town handing out cash so they can derail that other doc maker’s work. That’s a FAIL. Deliver us from greed and hubris.