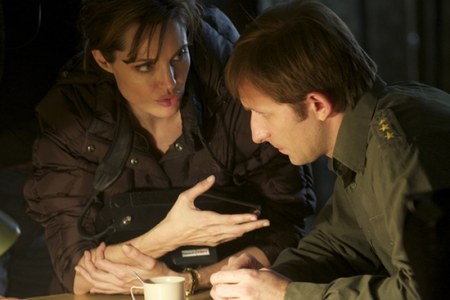 If Angelina Jolie had a press person or cared about the press she might not be in so much trouble today. She’s being sued by a Croatian named Josip J. Knezevic who claims Jolie made his book into her directing debut, “In the Land of Blood and Honey.” The complaint, filed by a Chicago law firm, claims that Jolie’s Bosnian producer, Edin Sarkic, had meetings and exchanged text messages with Knezevic establishing a chain that led to the alleged plagiarism.

But a Google search of Knezevic turns up an interesting exchange on You Tune from about four years ago. Knezevic got into a pissing match on the YouTube message board with another filmmaker, Robbie Wright. He claimed that Wright had stolen his work for a video about the Bosnian conflict set to Seal’s record, “Crazy.” But people on the board came to Wright’s defense, and Wright sent Knezevic copies of all his press passes from the Bosnian-Serbian war. He and his followers say all the footage from the video was shot by him.

Here’s the link to that page: http://www.youtube.com/all_comments?v=mUVJU3uWOuo&page=2

Knezevic’s lawyer tells me he knows about this exchange. “It isn’t material to our case.”

Knezevic has filed his suit under an Americanized name, Joseph J. Braddock, against Jolie, Sarkic, and Graham King’s FilmDistrict.

The lawsuit attempts to establish that contact was made between Braddock and Sarkic, as well as between Sarkic and Brad Pitt’s Make it Right Foundation. Emails and texts could be evidence that Jolie could have been made aware of Braddock’s novel. The suit goes on:

What’s interesting about this case: usually people who sue over plagiarism wait until a movie or book has made some money, then swoop in. In this case, the complainant isn’t waiting at all.

Meantime, Jolie’s movie has been mostly ignored in this awards season. Jolie hasn’t helped herself so much by banning press from tonight’s premiere and party–much the same way she had photographers tossed from Namibia years ago, and insisted on reporters signing agreements not to ask her certain questions during the release of “A Mighty Heart.” Oh, Angelina. For a woman who claims to be a diplomat, you’re not very diplomatic.