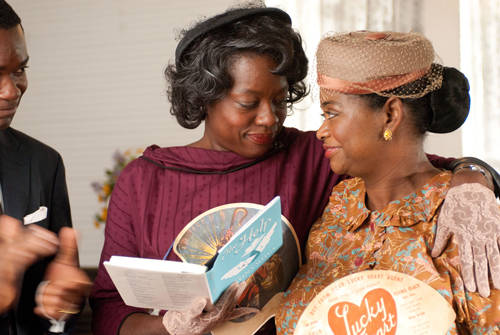 Considering how serious “The Help” really is, it’s nice to see the Oscar buzzed actresses from it have a sense of humor. At a lunch/screening on Friday for the terrific Disney film, I asked stars Viola Davis and Octavia Spencer how they dealt with co-star Bryce Dallas Howard off camera. After all, Howard plays a nasty, racist socialite who causes a lot of misery for the local maids. “We just took Bryce out back and gave her a beating,” laughed Davis. She and Spencer held forth at the lunch, at Desmond’s on East 60th St., with a room full of admirers.

“Bryce is like the sweetest person. When we met her, I thought, how’s that going to work?” Davis said. “Then the cameras rolled and she went right into the character.” Spencer talked me about her relationship with co-star Jessica Chastain. “We’ve become great friends. I’m having dinner with her in LA right before Christmas. That’s the way it was from the beginning.” Davis is a cinch for a Best Actress nod, while Spencer and Howard should be locks in Best Supporting Actress. (Chastain will be covered in that category for “The Tree of Life.”)

Meanwhile, Davis told me to send a message to “Iron Lady” star Meryl Streep, with whom she will likely be in the Best Actress race. “You tell Meryl Streep it’s not about competition,” she said, with great gravity. Remember, the two had quite an on screen showdown in “Doubt.”

As for Octavia Spencer, her next film is Diablo Cody‘s directing debut. Like the upcoming “Young Adult,” which Cody also wrote, “it’s not a lot of laughs,” says Spencer. “But we’ll try and get a few in.”