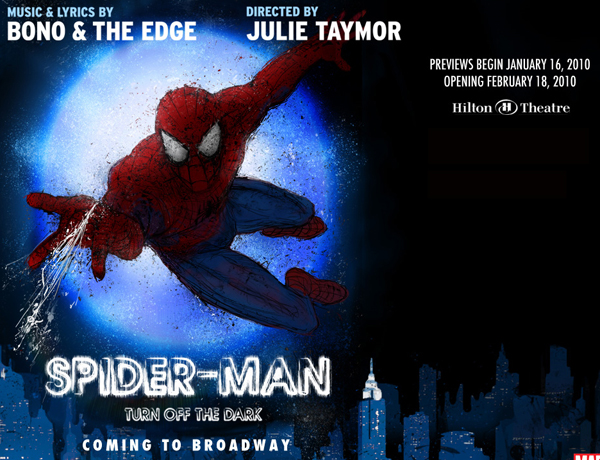 So “Spider Man: Turn off the Dark” is a year old, technically. It began previews a year ago yesterday. In Monday’s New York Times (and online Sunday night), producer Michael Cohl goes out of his way to be nasty to the show’s creator, Julie Taymor. The Times’s Patrick Healy is only too happy to help him. Why not? Taymor has been kicked to the curb. Although she worked on the show for years, and most of its structure and invention belongs to her, she’s been paid next to nothing.

It’s hard to imagine at this point that Bono and the Edge, fighters for and defenders of human rights around the world, aren’t outraged. They wrote the music for “Spider Man.” They are amply aware that Taymor’s book remains the backbone of the show. Her costumes and characters, her vision, are still the underpinning for the show. The Tony committee has ruled that only Taymor is eligible to be considered Best Director from “Spider Man.” And yet, the bile keeps churning. How about paying this woman, and making peace?

The fact is, Bono and the Edge were not there one year ago. They were on tour. Maybe they didn’t like what they saw when they finally arrived at the Foxwoods Theater in December. But it’s time for them to step up and defend their lead artist. Sit down and watch “Spider Man.” From a year ago, nearly everything that Taymor created remains in the show: Arachne and her weaving–the show’s best number; the Green Goblin, his costume, and humor; Spider Man–played by Reeve Carney, whom Taymor cast; Peter Parker’s schoolmates, his crazy bounce off the wall bedroom, the pas de deux with Arachne, the black out scene of Peter and Mary Jane on the fire escape. And so on.

There’s a song in “Spider Man” that I called “Say it Now”–(ironically its real title is “I Just Can’t Walk Away”). But it’s time for Bono, the humanitarian, to “say it now” and come to Taymor’s aide. Anything else is unseemly.