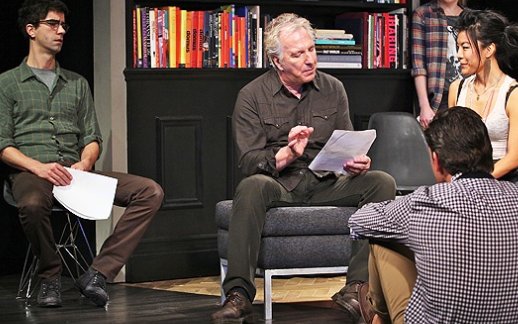 It was only a few minutes into “Seminar,” Theresa Rebeck’s new hit Broadway comedy, when I realized who Alan Rickman was playing: the famed book editor and writing teacher Gordon Lish. After I picked my jaw up off the floor, I said as much to Rebecca Romijn, wife of actor Jerry O’Connell, sitting next to me. I whispered it. She replied, “I heard it was David Milch,” referring to the TV writer known for “Hill Street Blues,” other dramas, and HBO’s upcoming “Luck” with Dustin Hoffman.

Rebeck herself told me after the play last night that she’d never met Lish, but “I’d had friends who took his course.” She admitted to having been a writing student once of Milch. Like all writers of roman a clef, Rebeck insisted Rickman’s Leonard–a brilliant writer/teacher/editor who sleeps with his female students and is utterly self-involved–was pure fiction.

Well, that may be. But Leonard is as much Gordon Lish as actress Lily Rabe, the real star of this show, is the daughter of playwright David Rabe and the late great actress Jill Clayburgh. Lish, wherever he is, should be happy: though the invented Leonard was once labelled a plagiarist (something Lish never was by any means–this is total fiction), he is brilliant. And while he does sleep with both female students in his $5,000 writing seminar held in a private apartment, he is also the last of the Mohicans–the real thing in literature. For Lish, who made the careers of Raymond Carver, Harold Brodkey and countless others, “Seminar” is flattering.

All that aside, the “Seminar” premiere was a fun night because Angelica Huston and Judith Light were in the audience, as well as David Rabe and producer Amy Robinson, plus Hollywood’s Paula Weinberg and Rick Nicita and New York’s ICM chief Adam Schweitzer. Designer Cynthia Rowley and husband Bill Power joined Romijn, who caught me up on her and O’Connell’s nearly three year old twin girls. They’re adjusting to New York by hitting the Natural History museum, among other places. “We’re staying in Jerry’s parents’ apartment, where Jerry grew up,” Rebecca told me. The parents have been banished to California. But O’Connell gave the entire cast and producers framed copies of a drawing his dad, Michael O’Connell, did of them. Very nice touch.

Hamish Linklater and Hettienne Park round out the cast of “Seminar.” There is nudity, kids. Park bares her breasts, and Rabe shows her bottom. “They share nudity duties,” quipped one insider. “Seminar” is 90 minutes of fun, no intermission. It joins “Private Lives,” “Venus in Fur” and “Other Desert Cities” as part of this fall’s bumper crop season of excellent plays.

And while they’re all good, this is Lily Rabe’s breakthrough moment. She’s ready, Hollywood. You wonder where the next Oscar nominees will come from. Lily Rabe will be head of the next class.