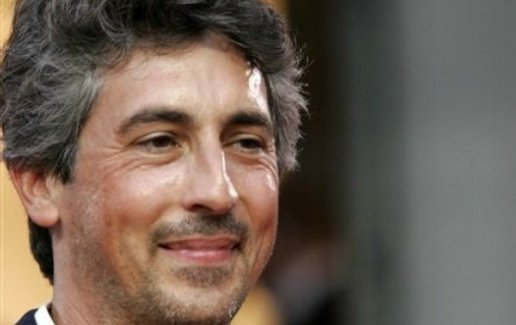 “The Descendants” opened yesterday to just about 100% rave reviews. Alexander Payne, who’s made “Sideways” and “About Schmidt” and “Election,” knows how to adapt a novel. He’s turned “The Descendants,” based on a novel by Kaui Hart Hemmings into the year’s big American dramatic hit film. Payne is headed to the Oscars with likely many nominations–Best Picture, Director, Adapted Screenplay, and Supporting Actress in Shailene Woodley. The film also boasts a Best Actor performance by George Clooney, who will find himself, oddly, competing with his good friend Brad Pitt (“Moneyball”) and the actor he directed in another film (Ryan Gosling, “Ides of March”).

At the Hollywood premiere at the Academy in Beverly Hills last night, Clooney arrived with his lady friend Stacy Keibler.  Our LEAH SYDNEY reports that they were lovely, and gracious and George was his usual sweet self to all.  Leah writes: “George said hi to his press friends, his actor friends Christopher Heyderdahl, Virginia Madsen and co-star Beau Bridges. George also led the crowd into a happy birthday song for actress Shailene Woodley who turned 20.  Irena and Mike Medavoy chatted with Mad Men’s Matt Weiner and his wife Linda Brettler, actress/producer Colleen Camp conferred with director Jon Avnet.  Jon told us his next film will be an adaptation of Fannie Flagg‘s “A Redbird Christmas.” Jon had a big success years ago with Flagg’s “Fried Green Tomatoes.”

Payne had no trouble singing Clooney’s praises. He said: “Clooney actually lives up to his hype.  This is not a director at his premiere shamelessly promoting his star .  I could give a f–k.  He really is delightful.”

We asked him what was the best thing about working with George Clooney?

“Getting to be around George Clooney. I had been warned that he’s a super excellent presence on set and they were right.”

Payne does not seem to be swept away in the Hollywood machine.  How does he manage that?   He lives in Omaha, Nebaska when he’s not in Los Angeles.  Does he feel like an outsider?

“They seem to making room for me,” he said. “I celebrate it all-but all these things, the beautiful premieres, any of the notoriety I get from this film or my previous films is wonderfully ephemeral. If I know that, then I can enjoy it. And I do enjoy it. We have to say, ‘I’m here in this moment right now,’ because it will quickly go away. We all will get quickly swept up under the giant rug of history. We’ll all soon be ashes to ashes and dust to dust.  The knowledge of that impending loss should really force us to enjoy this all the more. Make hay while the sun shines. Everyone in then business would be better off if they knew all of this Hollywood stuff is ephemeral.”

Payne’s next film will be a father-son road trip, shot from Montana to Lincoln, Nebraska and tentatively titled, “Nebraska.”

Next film? ”I’ll be shooting back in Nebraska. a father-son roadtrip shot from Montana to Lincoln Nebraska. Tentatively titled “Nebraska.”  It’s not cast yet, but Jack Nicholson, Robert Duvall, and the semi retired Gene Hackman (come back, Gene!) are said to among the names considering the role of the father.