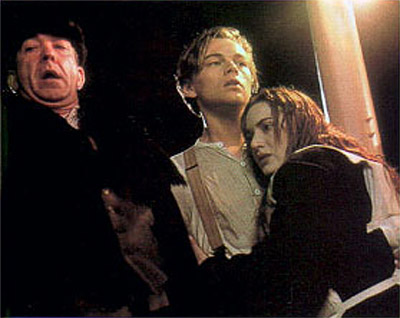 James Cameron‘s “Titanic” is coming back. This time, the 1997 film will be in 3D thanks to James Cameron, the PT Barnum of his generation. While it cost zillions to convert “Titanic” into 3D, it will likely pay off handsomely. “The Lion King 3D,” for example, has picked up $100 million in new shiny money since its (re)release. The new “Titanic” will be a spectacle of a release, no doubt, with lots of hype and hoopla. It also comes at a typically dead point in the release schedule–April 6th. It should be an interesting weekend. The other new films will be “American Pie Reunion,” with Jason Biggs and co. basically do “American Pie 2D”; the Farrelly Brothers’ modern big screen version of “The Three Stooges”–either the worst idea since “Valkyrie” or pure genius; and an actual original film–“The Cold Light of the Day” with future Superman Henry Cavill. Of those three. “Stooges” is my bet, because it’s filled with cameos from guest stars to ensure its curiosity factor.

And so “Titanic.” A box office phenom, the Cameron film is a visual circus. But it’s also still the same film it was when it opened in December 1997.

But it wasn’t nominated for any screenplay awards. That’s because it’s a shot by shot remake, in many instances, of previous movies “Titanic” (1953) and “A Night to Remember” (1958). It also shared an actor–Bernard Fox, who appeared in “Night” as well but is best remembered as Dr. Bombay on “Bewitched.” He’ll turn 85 next May.

“Titanic” won a lot of awards including Best Picture and Director for Cameron.  Gloria Stuart was nominated for best supporting actress.. Leonard DiCaprio wasn’t nominated for Best Actor even though Kate Winslet was up for Best Actress.

The 1998 Oscars, for 1997 films, were actually pretty interesting. Helen Hunt won Best Actress for “As Good As It Gets” principally because she was the only American nominated. She’s never been heard from again. The other actresses were much better– Winslet, Judi Dench for “Mrs. Brown,” Helena Bonham Carter for “Wings of the Dove,” and Julie Christie for “Afterglow.” But they all had accents.

The other nominated pictures were better films, but didn’t have the spectacle aspect–“As Good As It Gets,” “Good Will Hunting,” “L.A. Confidential,” and “The Full Monty.”