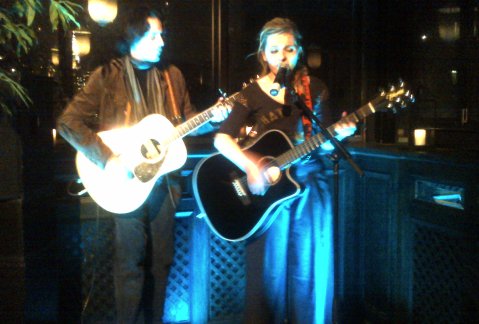 Today you’ll read some glowing reviews for actors Alessandro Nivola and Abigail Breslin in a terrific indie film called “Janie Jones.” But Hollywood isn’t always glamorous. Late last night, firetrucks were suddenly called to the posh GramercyHotel, where the “Janie Jones” cast was partying after its premiere. Nivola, director David Rosenthal, the film’s producers, actor Josh Charles, and producer Celine Rattray got stuck in the elevator. This was not the usual glitch. The gang was stuck for almost 3o minutes until the NYFD gallantly saved them.

Earlier at the party, both Nivola and Breslin performed for the partygoers, including actors Parker Posey, Celia Weston, Mitchell Lichtenstein, Nev Schulman, and journalist Annette Tapert, each showing off their musicianship.

Nivola, who is non pro but plays an errant rock star in the film, turns out to play a mean slide guitar. Breslin, who’s 15 and an Oscar nominee from “Little Miss Sunshine,” has a NY based band called Cabb. She performed two numbers on guitar with one of the members of the band. (Take that, Johnny Depp!) “Janie Jones” was picked up by Jane Rosenthal and Robert DeNiro‘s Tribeca Films last spring. Now the fun begins–the movie opens in five cities with outstanding reviews. A grassroots campaign could get the two leads nominated for Oscars, and definitely Golden Globes (if they feed the HFPA the right meal).

Nivola, who’s married to actress Emily Mortimer (“Hugo,” “Our Idiot Brother”) for years and has had success in “Junebug,” “Mansfield Park,” and “Goal!” is about to be an overnight sensation. In case you don’t know him, he’s an American, born in Boston, and lives in Brooklyn. His lineage is Italian and that’s his real name. I joked with him that it was never “Jeff Schwartz.” “”When I started acting, everyone said you’ll have to do something about that name. But I was proud of my father being Italian,” he told me.

Next year, he and Mortimer will star in a film together– their first since they met years ago. But for now, he’ll have to put up with great reviews for “Janie Jones.” In today’s New York Times, Stephen Holden called Nivola “brilliant but perennially overlooked.” Not anymore. But he should try to stay out of elevators for the time being!