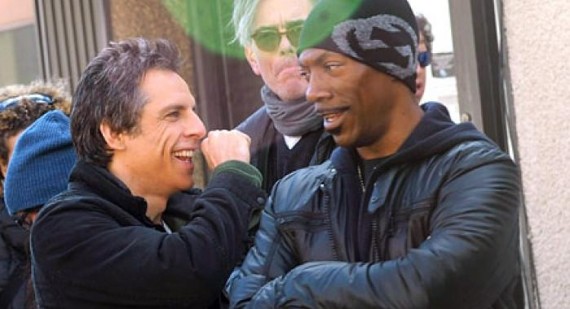 Brett Ratner‘s “Tower Heist” is getting an old fashioned mega push from Universal Pictures, a studio desperate for a hit after a slow year. Will “Tower Heist” be a Universal and universal hit? I think so, judging from last night’s star studded four star no expense forgotten premiere at the Ziegfeld followed by a lavish party at the Museum of Modern Art. Eddie Murphy makes a killer comedy comeback in “Tower Heist,” and Matthew Broderick kind of steals a film that also stars — with lots of presence–Ben Stiller, Casey Affleck, Tea Leoni, Nina Arianda, Alan Alda, Marcia Jean Kurtz, and Judd Hirsch.

And I mean, you know it’s a big deal when both Edward Norton and former flame Courtney Love are in the room. Also present, and loving the whole thing, Sarah Jessica Parker (Mrs. Broderick) with son James, and Stiller’s wife, Christine Taylor, as well as his sister Amy. I spotted Tracy Morgan, the Olsen twins, and screenwriter James Toback.

Universal studio execs and top agents were also in plenitude. Producer Brian Grazer was in deep conversation with ABC News chief Ben Sherwood. (His talented wife, Karen Kehela, is a producer on the film.) New York rock legend Garland Jeffreys kept getting praise from everyone for his new album, “The King of Inbetween.” Gabby Sidibe, who has a hilarious role in the film as a Haitian housekeeper, proved she’s not just “Precious.”

My favorite quote of the night came from Donald Trump. “Tower Heist” uses his Trump International Hotel in Columbus Circle as its locale, but Trump decided not to put his name in the film. “There’s a heist!” he said. Such a thing would never happen on his watch. Alan Alda, playing a Bernie Madoff like tycoon, has a pool on the roof of the movie version of the building, called just The Tower. The movie pool has a gigantic $20 bill painting on its floor, too. “They gave me ideas,” Trump told me with a laugh.