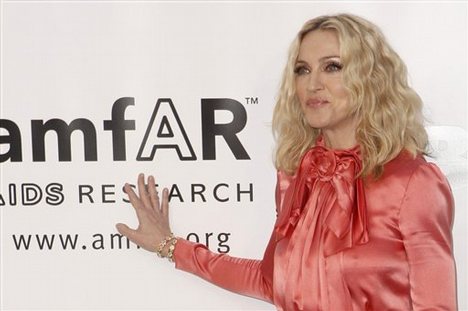 Madonna’s eldest brother, Tony (Silvio) Ciccone Jr, is homeless. If you didn’t see the stories over the weekend, Tony is living under a bridge in Traverse City, Michigan. Apparently he lost his job at his father’s 15 year winery, Ciccone Vineyards, in Suttons Bay, Michigan. The winery has terrible reviews anyway, and frankly, who in the world would drink wine made in Michigan? Certainly not Madonna, who tosses hydrangeas back in the face of a fan because she can’t stand ’em.

So no one knows if Tony Jr. is a bad guy, a thief, drunk, or what. Or maybe he just had a spat with his father (Silvio–Tony Sr.), brother Mario, and stepmother Joan, who run the business. Even  so, now it’s an international story. Madonna must be worth $200 million. She has homes everywhere and even picked up two kids to adopt from Malawi in Africa because she had so much money. But her brother is living, according to one report, “with vermin.”

On the website for Ciccone Vineyards, it reads: “The eldest of his three sons, Silvio Jr., can be seen helping him from time to time in the cellar.”

So is this the work of Kabbalah teachings? Wasn’t Kabbalah supposed to make Madonna more spiritual and full of heart? Of course, she did promise to build a school in Malawi for orphans. But after clearing the land of its villagers, she reneged on that deal. In fact, since her Raising Malawi charity was exposed a poorly run fraud, there’s been nary a word about that school. There also is still no federal tax filing for 2010 on record for Raising Malawi or Ray of Light, Madonna’s personal foundation.

No one is responsible for every adult member of their family. But Madonna lives life large. She’d do well to keep her house in order, especially as she gone into other homes (hello, Malawi) and given her opinion of them. On the p.r. front, this is an epic fail.

Madonna, btw, is on the outs with brother Christopher, who wrote a book about her. She’s closest to sister Melanie, who’s married to record producer Joe Henry. Mario, who now runs the winery, is her half brother, born to her father and step mother Joan after her own mother died.