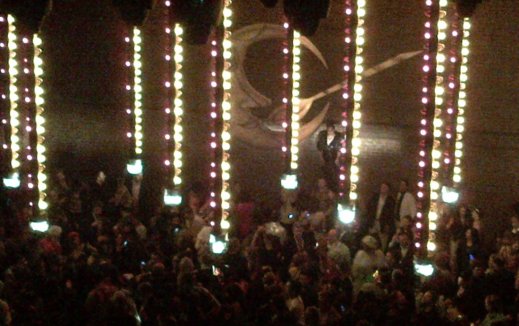 This morning, Studio 54 will wake up with a hangover, look around the floor for its clothes, and try to remember what happened last night. Now a dowager theatre home to the Roundabout, Studio will recall celebrating like it was 1977 last night, and was younger than springtime.

Oh yes, Studio 54. Liza, Calvin, Andy, Halston, Truman Capote. Bianca Jagger on the white horse. The doormen, the barricades, the coke, and the quaaludes. In 1977, New York City was pretty much on the skids. Steve Rubell and Ian Schrager threw the most decadent party in the history of the world. It would have gone forever except for tax evasion and jail for the owners. When it came back, under Mark Fleishmann, it was cool but not the same. Nothing ever is.

So last night, Sirius XM recreated Studio for just one night in its original home, now the Roundabout Theater’s place of business. Sirius XM has a Studio 54 channel that plays disco music from the era, so they commemorated it by reviving the club–down to the big silvery moon with the coke spoon hovering over the stage. And if you build it, they will come–from former doormen Richie Notar and Marc Benecke, to pr lady Myra Scheer to Schrager (now a wildly successful hotelier) to Carmen D’Alessio, who did all the legendary events. Liza and Calvin did not attend. But Keith Richards and Patti Hansen made the scene, along with Kevin Bacon, Naomi Campbell, Cameron Diaz, Clive Davis, Nikki Haskell, Denise Rich, Susan Lucci,  Randy Jones from the Village People, Carol Alt, Donald and Melania Trump, Lance Bass and some reality TV people.

I heard Gayle King was there. Ryan Phillippe was expected as we were leaving. Scott Greenstein and Steve Leeds from Sirius got kudos for pulling it off– the stage throbbed with dancers, the deejay mixed Gloria Gaynor and Donna Summer circa 1977 with Lady Gaga and Adele. The boy waiters were shirtless, and wore electric blue hot pants. Drag queens were de rigeur. There was a slight smell of marijuana, but nothing like the old days. No smoke, and no coke. Perrier was poured in the entry way. But the party was still going on, well after 2am. The irony: Marc and Richie wouldn’t have let most of those people in, back in the day. As Faulkner put it, Memory believes before knowing remembers.